If you’ve been following me on Instagram, you’ll have seen that I went to the Czech Republic a fortnight ago.

It was a very spur of the moment break away, booking the flights and hotel on the Wednesday, and travelling on the Friday. I originally planned to travel alone, but continuing with the spontaneous nature of the trip, my friend Solo decided to come along too, booking his flights just four hours before we had to be at the airport. Beat that for impulsive travel.

Though I flew into and stayed in Prague, my main reason for visiting the country was to climb the imposing “monster” on the top of this mountain: 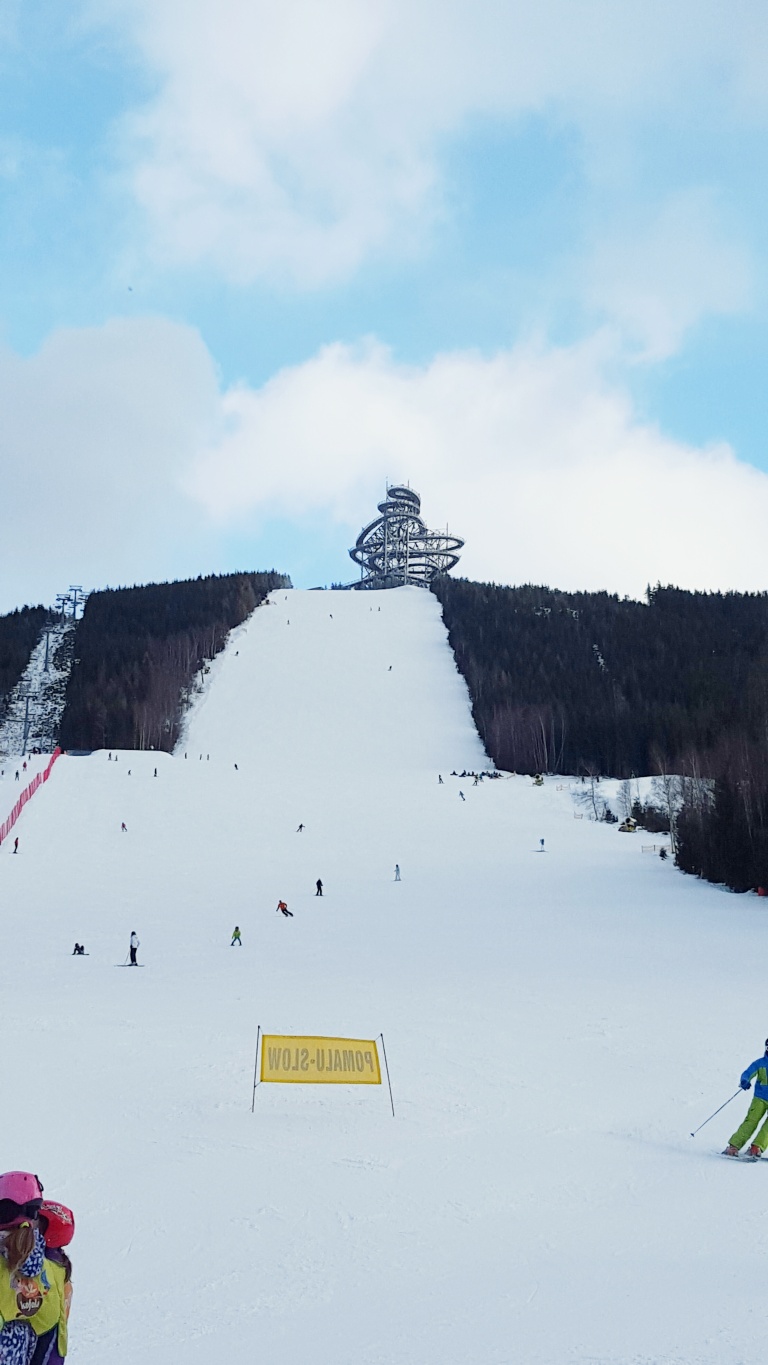 Resembling some kind of crazy roller coaster from the theme park of nightmares (Alton Towers perhaps?), this is actually the Skywalk in the sleepy little town of Dolní Morava.

Where is the Czech Republic Skywalk?

The Skywalk was my reason for travelling 958 miles from the comfort and warmth of my flat in Reading, and for trekking 121 miles from the capital of the Czech Republic. Maybe I’m as crazy as the architects who designed the impressive structure which sits proudly at the top of the tallest ski slope in the Dolní Morava resort, but as soon as I saw this story in the Daily Mail, I knew that one of my missions for 2016 would be to climb and conquer the Skywalk.

And a mission it was. As I said, Dolní Morava is about 121 miles from Prague – which may not seem that long (it’s roughly the same distance from London to Weymouth, which isn’t far in the grand scheme of things), but unfortunately there was no straightforward route for getting there…

How to get to the Czech Republic Skywalk.

From our hotel in Malešická we ended up taking a bus to Florenc, then a metro to Praha hl.n., the main station in Prague. From there it was a train to Ústí n.Orlicí, and then another train to Lichkov. Once in Lichkov, we then had to find a taxi to take us to Dolní Morava – which was possibly the hardest part of the journey, as a) neither of us spoke Czech, b) it was a Sunday afternoon with zero people around, plus c) Lichkov is a tiny town out in the middle of nowhere, meaning we couldn’t just use the Uber app. In fact, Wikipedia suggests Lichkov’s population is just 552 – half the number of people who follow me on Twitter.

Lichkov did however have a train station with a platform, unlike some of the “stations” that the second train stopped at (if you’re curious, Google Têchonín and Mladkov).

On the plus – and one thing that I absolutely loved about the public transport in the Czech Republic – travelling 121 miles actually only cost the equivalent price of a Big Mac meal in the UK. We paid about £14 each for the round trip. We certainly couldn’t have travelled 242 miles for £14 in the UK by train (not unless we’d managed to bag a super cheap, advance, off peak, sale ticket anyway).

Once we arrived in Dolní Morava, after four hours of epic-but-cheap travelling, we were pooped, but undeterred. I had gotten this far, I wasn’t going to just give up – “always carry on”, that’s my motto. I wanted to get up that mountain and climb that Skywalk. So we bought our combi-chair-lift-and-Skywalk ticket, and did the last stretch of the journey up the mountain surrounded by skiers and snowboarders, who were much more suitably dressed for the -5c temperatures than us.

The mammoth trek was totally worth it though. The Skywalk really is a feat of engineering genius, my pictures don’t do it justice at all: 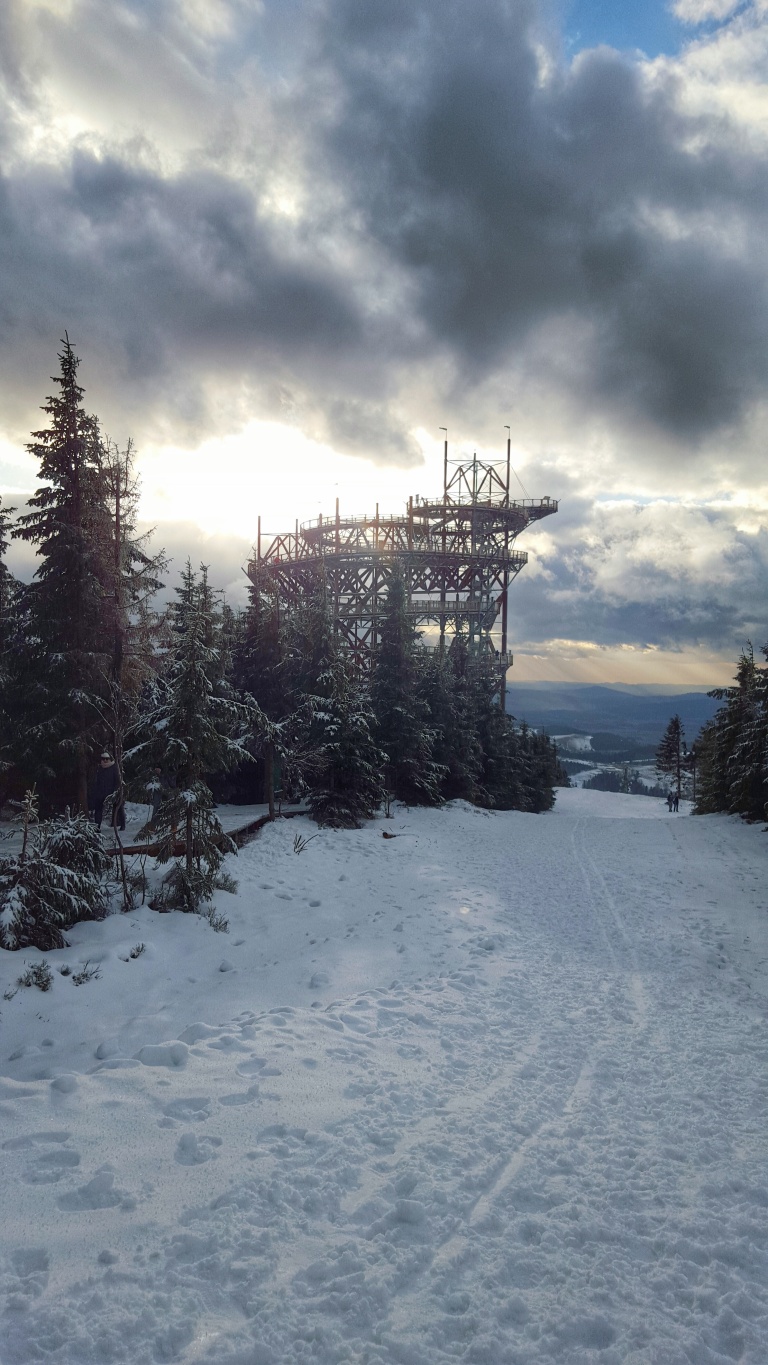 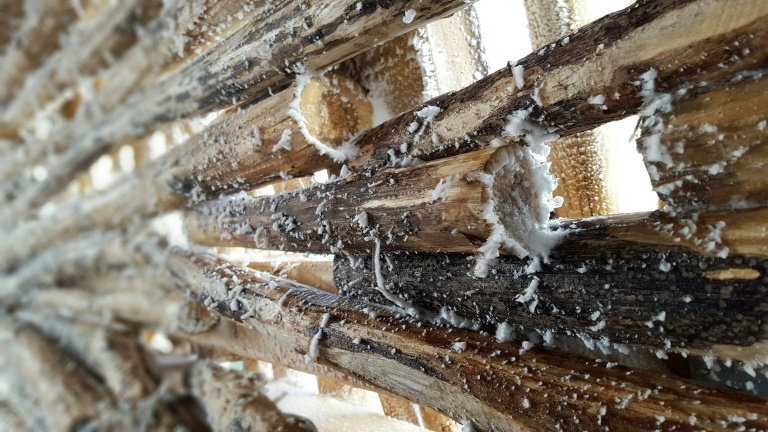 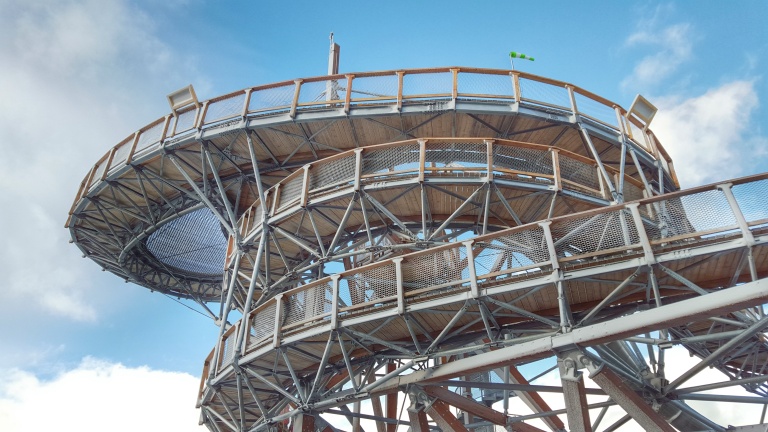 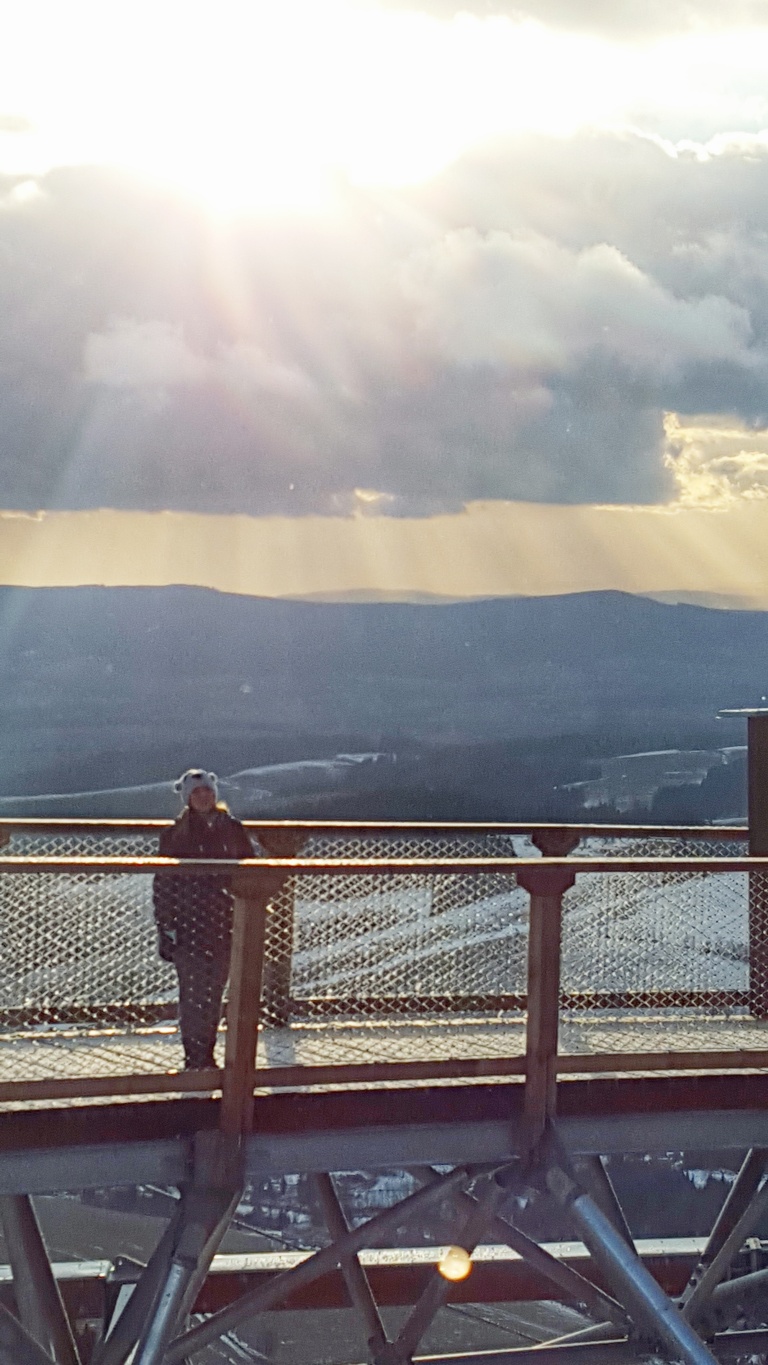 The Skywalk, which only opened on 5 December 2015, is a 55m (180ft) high wooden walkway on top of a mountain. The baby of architect Zdeněk Fránek – who first dreamed up the crazy construction in 2012 – it is designed to be both fun and educational. Oh, and it has a helter skelter-type slide from the top to the bottom. So what’s not to get excited about?

As you walk up the gradual incline of the wooden walkway, there are plaques telling you about the history of the construction, and pinpointing areas of interest on the horizon. Unfortunately it was absolutely freezing when we scaled the Skywalk, so we didn’t really stop to read much, but here are a few facts we learned:

Once at the top, you can take in views of the Králický Sněžník massif, the Morava river and the Krkonoše mountain range. You can also learn from information plaques about the history of the adjacent valley, and about the clouds as a meteorological phenomenon. But as I said, it was very windy up there, so we didn’t hang about learning the names of clouds. 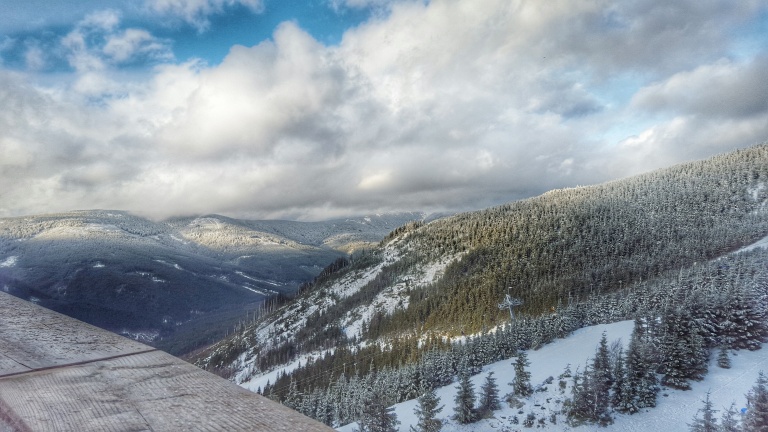 What I can tell you is that the whole experience was pretty awesome, and well worth the trek from Prague.

I’ve since found out that the Dolní Morava resort is open all year round, with skiing and snowboarding down the mountains in the colder winter months, and hiking, mountain biking and Segway tours there when the snow melts. Apparently in the summer there is also a water park, an “adrenaline park” and a picnic and BBQ area.

I’d love to go back there in the summer, just to see how different it is, and also so I can say I’ve actually done the slide.