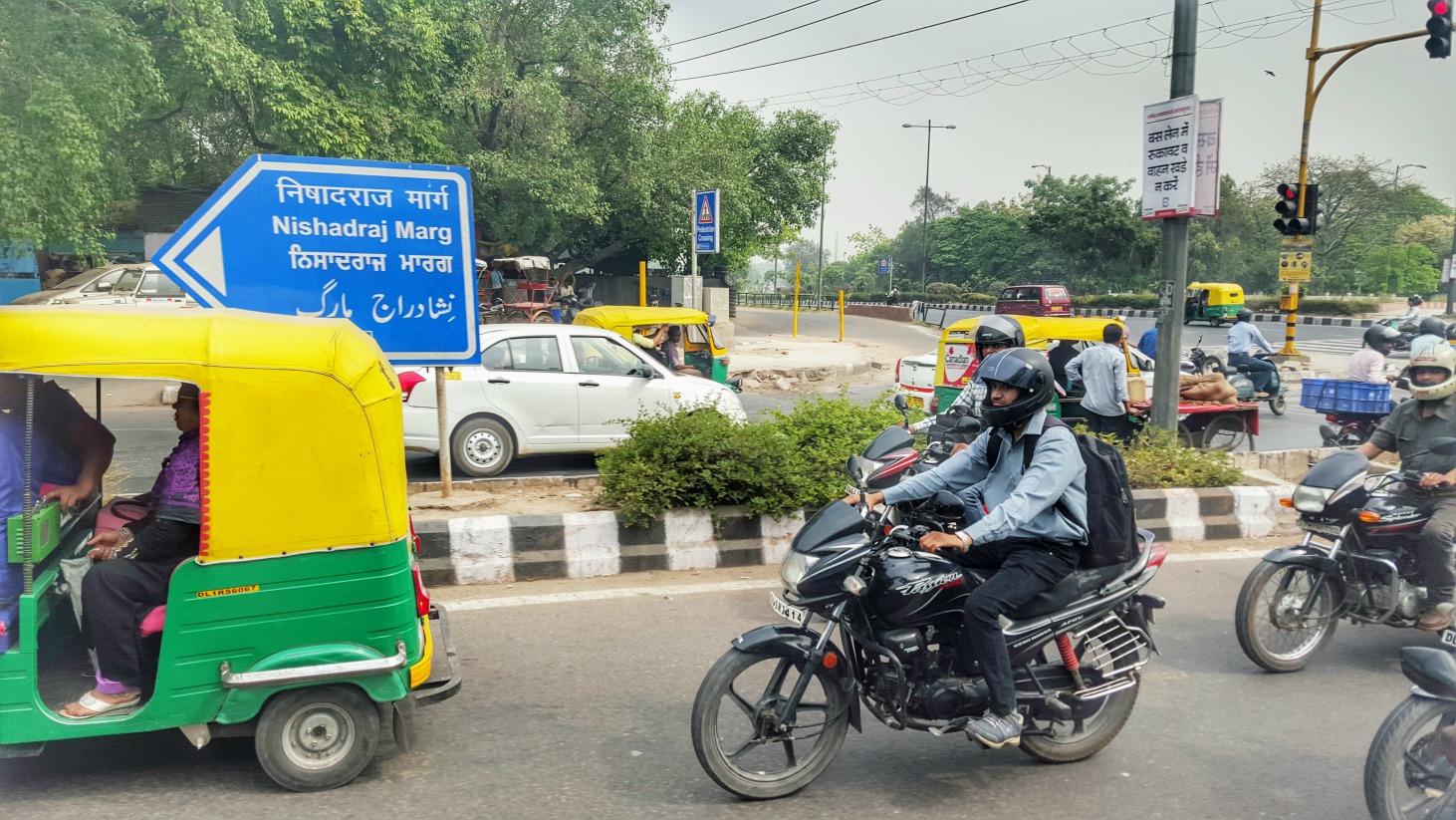 I’m writing this post on the journey to Agra, the second leg of my seven-day Golden Triangle tour. So far, as expected, it’s been an amazing experience. There’s still so much to come, too. Tonight our group will be going to the Mehtab Bagh gardens, to see the Taj Mahal at sunset. And tomorrow we’ll be exploring Agra some more and actually visiting the Taj Mahal, ticking off one of the top things on my bucket list. I can’t wait.

Then, after Agra the group will be heading to Jaipur, where we’ll have a traditional evening meal with a local family, and maybe get to ride an elephant (fingers crossed for that one, as I’ve never been on an elephant before). 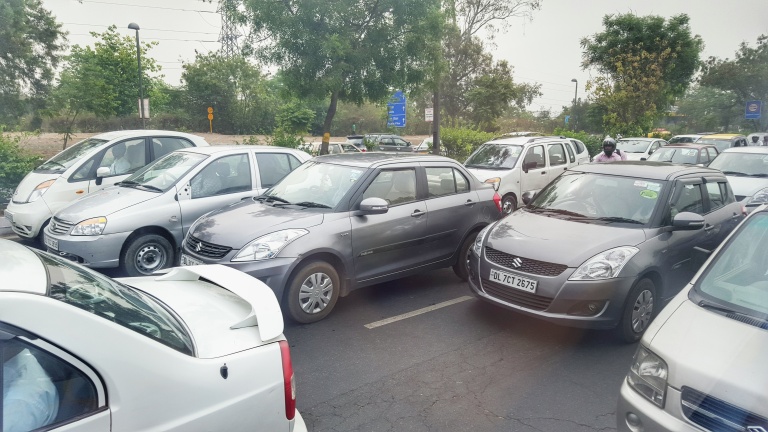 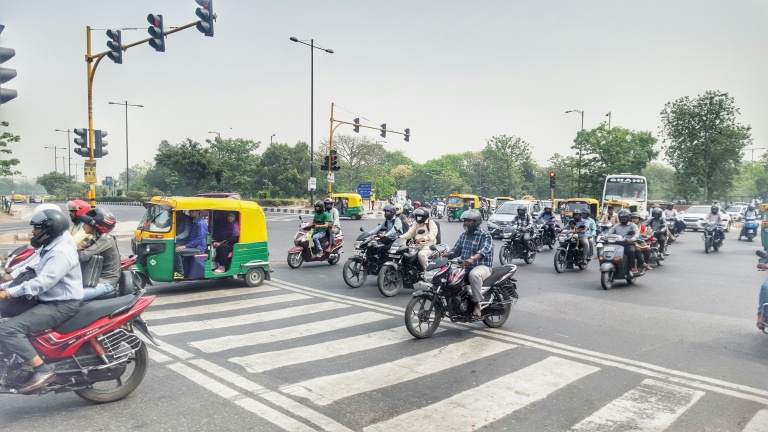 The first two days of the the tour were spent in India’s capital, Delhi. Situated on the bank of the River Yamuna, it is divided into two parts: Old Delhi and New Delhi.

Despite being the capital it’s actually only the third biggest city in terms of population, being trumped by Calcutta and Mumbai, which each have 23 and 21 million inhabitants respectively – compared to Delhi’s 17 million. That’s still a lot of people though – double the number living in London (which is 8.5 million, in case you’re curious).

And with that many people, there is obviously going to be a lot of vehicles on the road. People have to get from A to B, it’s a given. But no amount of research or tip offs from friends and family (whom gave me a lot of advice about Imodium, when I mentioned I was coming to India) can prepare you for the traffic on the streets of Delhi. Driving in Delhi is something else completely. There are cars, buses, lorries, taxis, donkeys, bikes, motorcycles, rickshaws, tuk tuks and tractors in the roads. 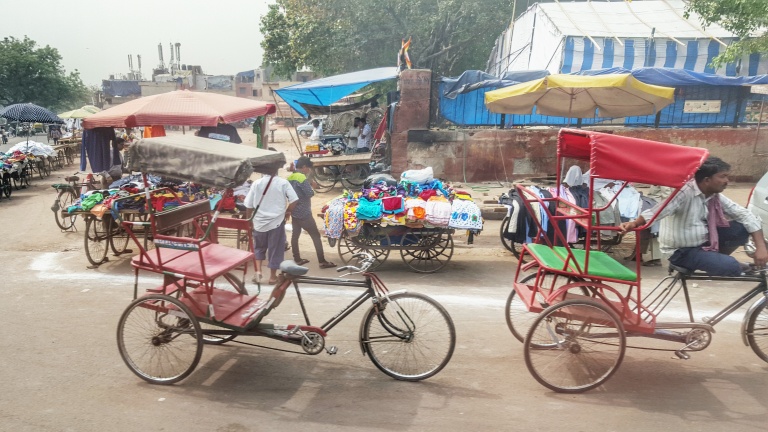 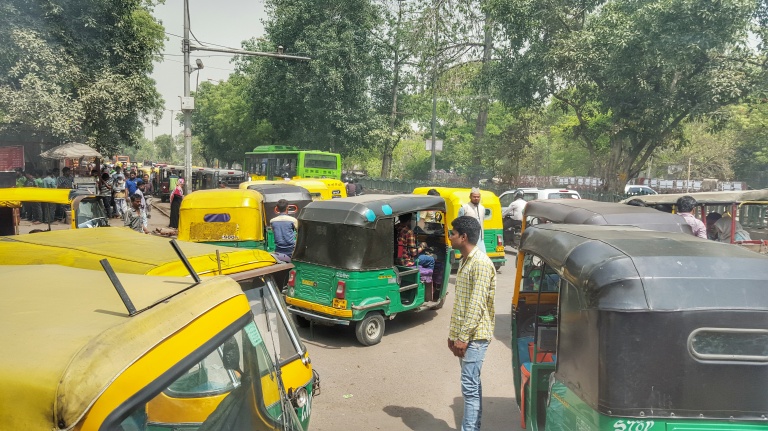 The flight from Muscat arrived in Delhi in the early afternoon, so it wasn’t even rush hour as our tour bus drove us away from the safety (and sanity) of the airport roads and into the chaos of the city. Later on in the trip our tour guide, Dilip, explained that there’s no such thing as rush hour in Delhi, “every hour is a rushed hour”.

As the bus pulled off of the highway and onto a crowded street, the sound of horns was deafening. My first taste of India was one of pandemonium – ‘where the hell had I brought my 75-year-old Grandma?‘ I thought. The city is currently trialing an odd-even licence plate congestion system, similar to the one I’d learnt about in Bogota, but it didn’t seem to make much difference; the roads were chaotic, and I didn’t feel safe at all. 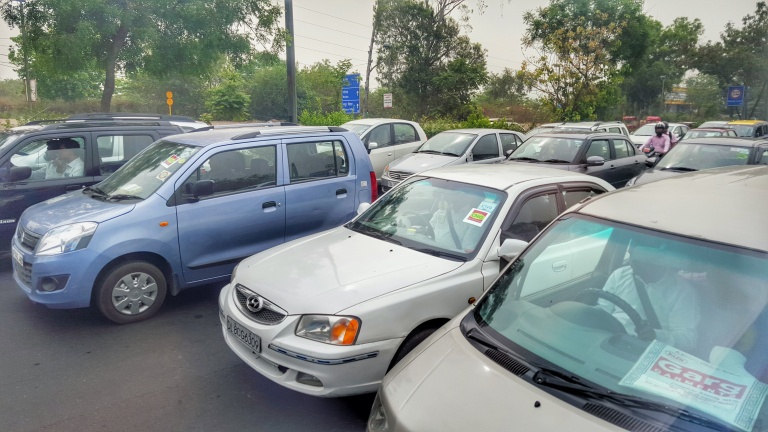 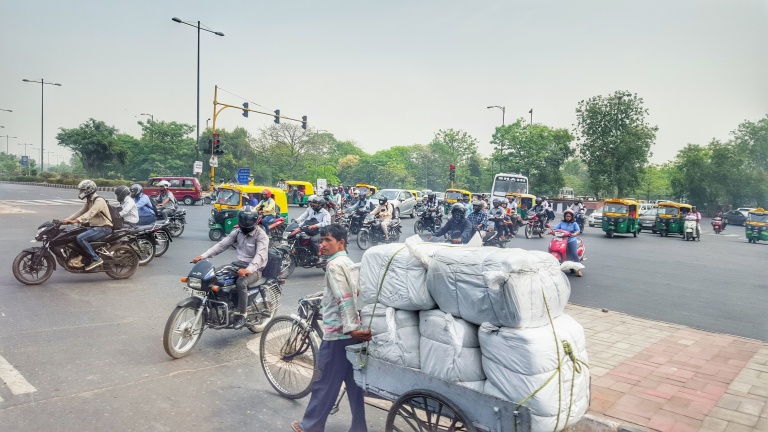 I’ve only been to two other cities that have made me feel this uneasy on the roads: Cairo, the capital of Egypt, and Colombia’s capital, Bogota. In both cities I was being driven around in a car, and in both cities I held my breath and shut my eyes in fear on a number of occasions.

On one such occasion in Bogota, I actually started saying “shiiii…” as a moped became sandwiched between our little Volkswagen Gulf and a massive bus, heading straight for the passenger door I was sat beside. As the moped brushed against the wing mirror I thought to myself ‘oh my god, this is how I’m going to die‘. Then I suddenly remembered there was a six-year-old boy and a baby in the car, and the exclamation quickly turned to “shiiigaaaarrr.”

As my tight fist let go of the spongey car seat, my knuckles went from white back to pink. I hadn’t died, phew.

In Cairo it wasn’t uncommon to see the three-lane motor way which circles the city (similar to our M25 around London) become a six or seven-lane affair. Cars decided to go wherever there was a space, regardless of the road markings.

Our driver in Cairo had a brand spanking new Mercedes, without a speck of dirt on it. An ex-boyfriend (who I’d taken the trip with back in 2012) and I whispered between ourselves in the back about whether we felt safe or not. Obviously he was a very good driver, as there wasn’t a dent or scratch on the car – a complete contrast to all the other vehicles on the road, some of which wouldn’t have been out of place at a scrapyard.

But we still winced as we saw a car plough into the back of a bus, and then a motorbike into the back of the car. Noticing our disbelief at what we’d just seen, the driver told us calmly not to worry: “This is normal, no one is hurt, it will be ok.” The drivers of the bus, motorbike and car had all convened at the back of bus to assess the damage. We watched on amazed as they nodded their heads, shook hands and went back to their respective vehicles. “See, it’s normal.” 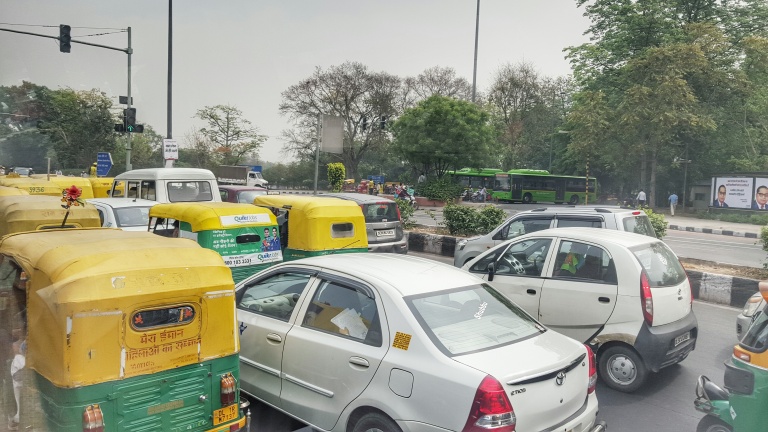 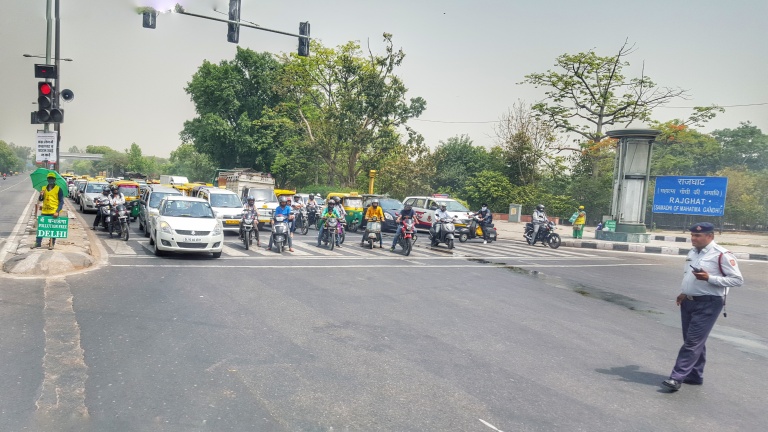 If you’re planning to travel to Delhi, don’t underestimate the traffic. It’s much safer to get a taxi or driver, than hire a car. However you travel though, pack a spare set of underwear, just in case.

Have you ever been to a city who’s roads are as hair-raising as Delhi’s? Drop me a comment below, I’d love to hear about your experiences.

73 thoughts on “Driving in Delhi: not for the faint-hearted.”