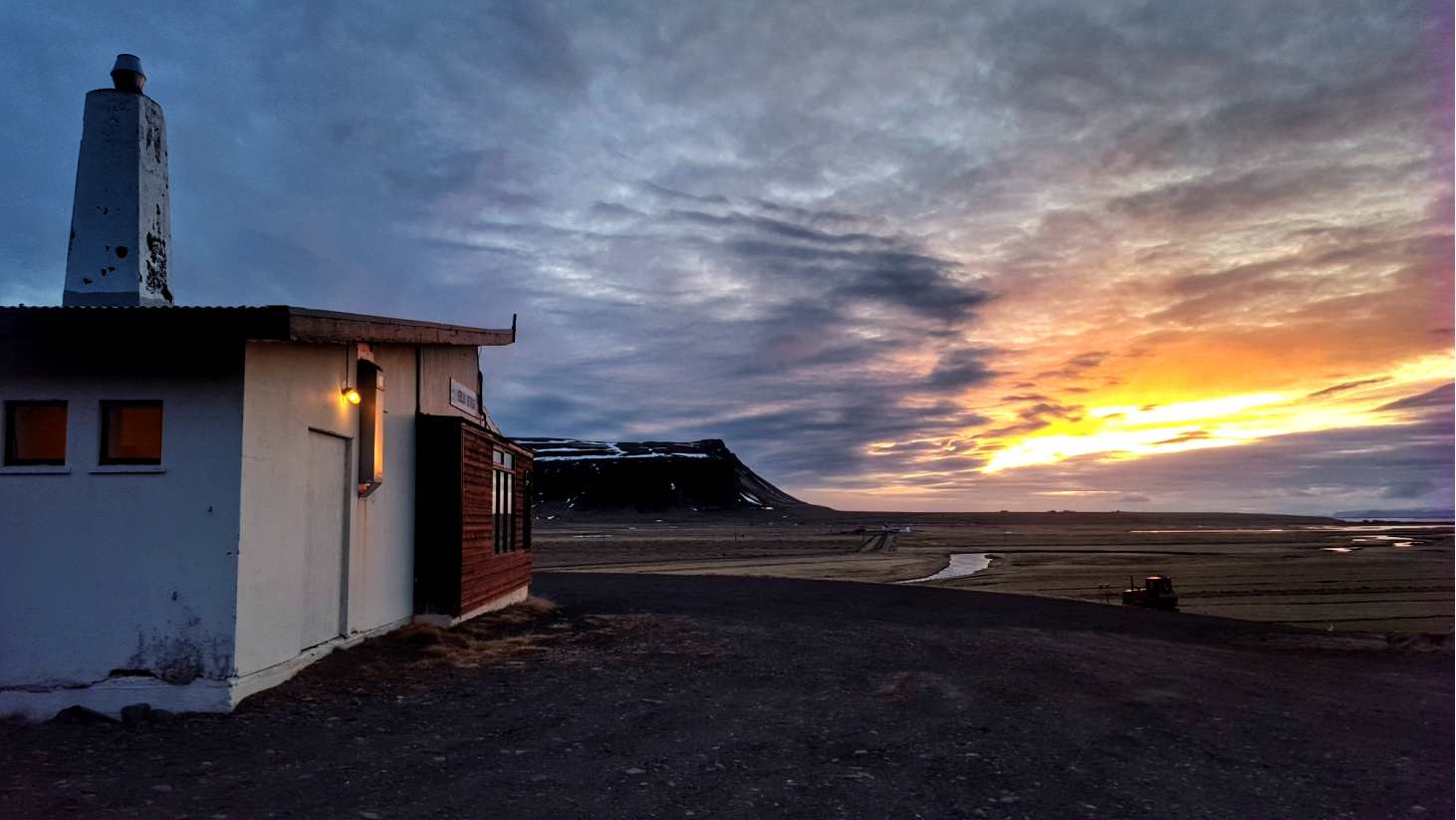 After my trip to Iceland last year, I knew that when I eventually made it back to the island it would be to explore further afield than just the capital, Reykjavík. I also knew it would be for longer than five days, because although I crammed a lot in to those five days in December, it wasn’t enough time to see and do everything I wanted.

What I didn’t know was that my return visit to Iceland would be just 111 days after my previous trip. But hey, I guess when you love a place so much despite it’s rotten egg smell, and the plane tickets are super cheap, sometimes it’s hard to stay away (even when you know there are other places to explore, things to see and items to tick off your bucket list). So, I booked my flights to Reykjavík and set about planning my second trip to Iceland.

I was originally going to travel solo around the island for seven days, but after chatting to my Icelandic friend Björn (who I’d met in December), we decided to drive together to the Westfjords region on a mini adventure. The Westfjords were an area he was keen to explore more, and though I knew nothing about the region, after browsing some pictures on Instagram, agreed we should head that way. It looked like a magcal place, with breathtaking scenery and beautiful lunar-like landscapes. So I set about searching for somewhere for us to stay.

As the area is so remote (and it was Easter bank holiday weekend when we travelled), hotel choices were pretty limited and there were next to no Airbnbs. And the few places that were available weren’t cheap. Then one Saturday evening, five days before I was due to fly out, I came across Hotel Ljósaland on Booking.com…

The hotel is straight off the main – and only – road, though I’m hesitant to call it a “main road”, given we passed just three cars the whole time we were driving on it on the first day of our road trip. Despite being on the main road, the good news is that the area is so remote that you’re 99.99% guaranteed to have the quietest night’s sleep of your life.

Also, if you’re driving north from Reykjavík like we did, you definitely won’t miss it. 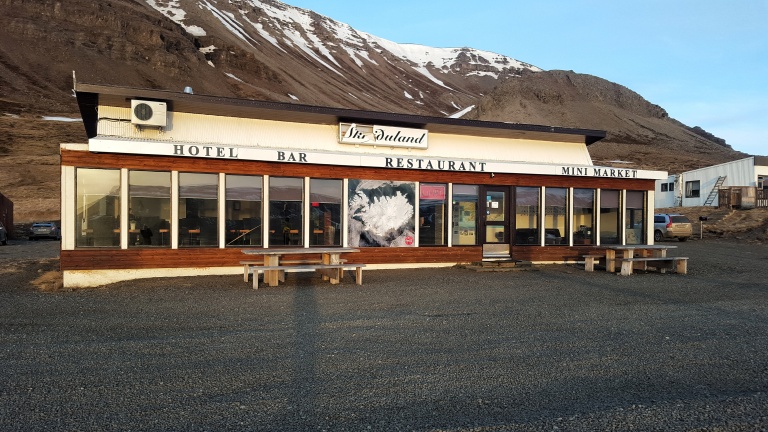 The main building of Hotel Ljósaland is big and spacious, with lots of wood panelling, stone and exposed brick work. It’s divided into a few separate areas, but these areas don’t have doors, so I can only imagine it’s hard to keep the place warm in the colder months (may have to visit again to verify this).

The biggest of these areas is the dining room, which has about 10 tables, all laid up ready and waiting for hungry guests. As it’s the only hotel and restaurant in the area, I’m sure it can get quite busy during peak season, but when we arrived mid afternoon it was empty. Not that I minded, as it gave me a chance to snap some pics. I loved all the quirky little details here and there, which reminded me a tad of my local, The Stags Head Inn, when I lived up in Yorkshire briefly.

Aside from the dining room, there was a cosy little snug area with some armchairs and an open fire, a bar with plenty of spirits, a games room with a pool table and plenty of reading material (more on that below), as well as a sort of porch-cum-conservatory, which had a big, well-worn leather sofa looking out across the valley. This was the perfect place to relax after a long day exploring the Westfjords. 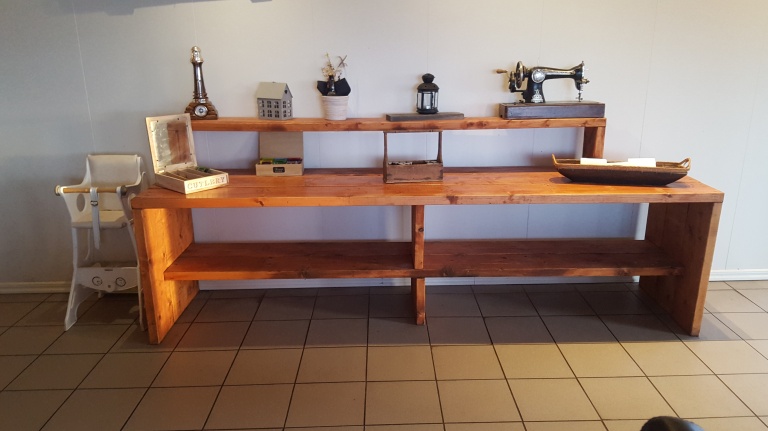 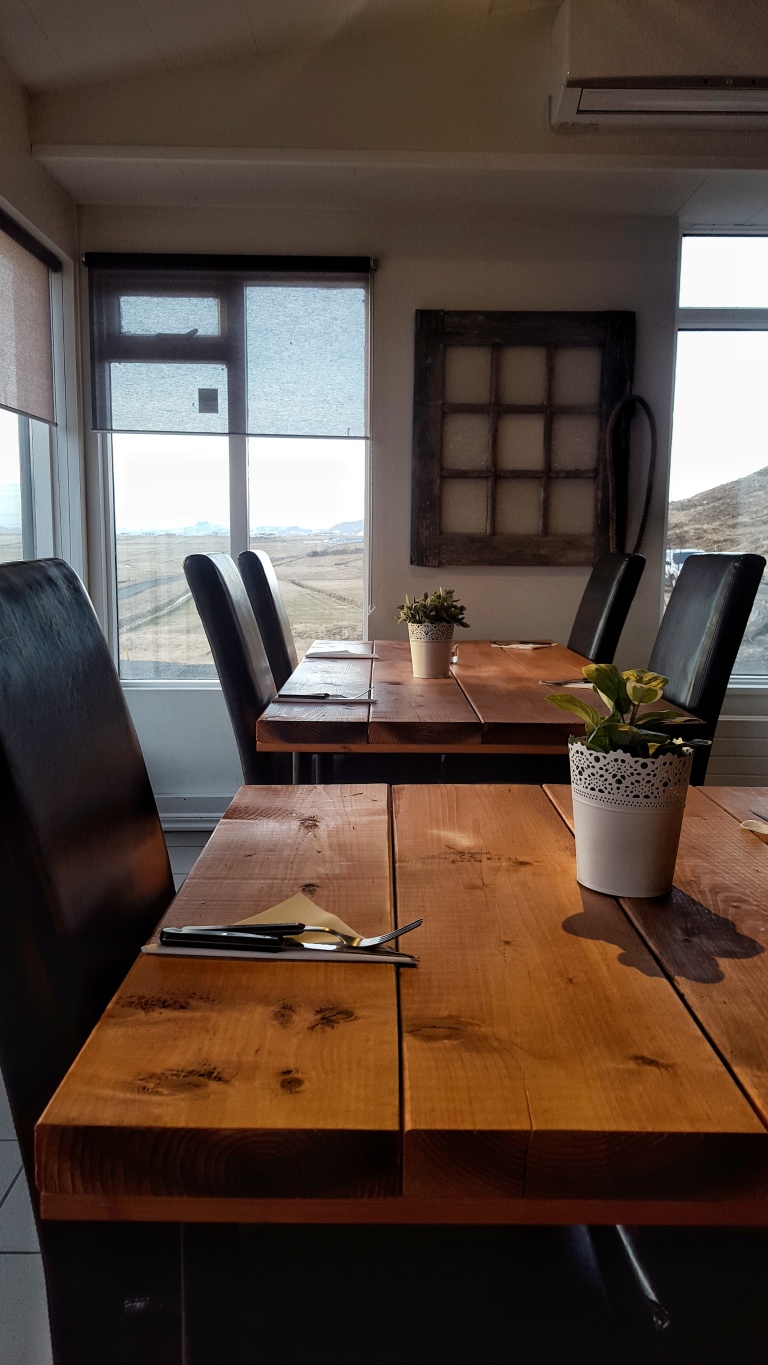 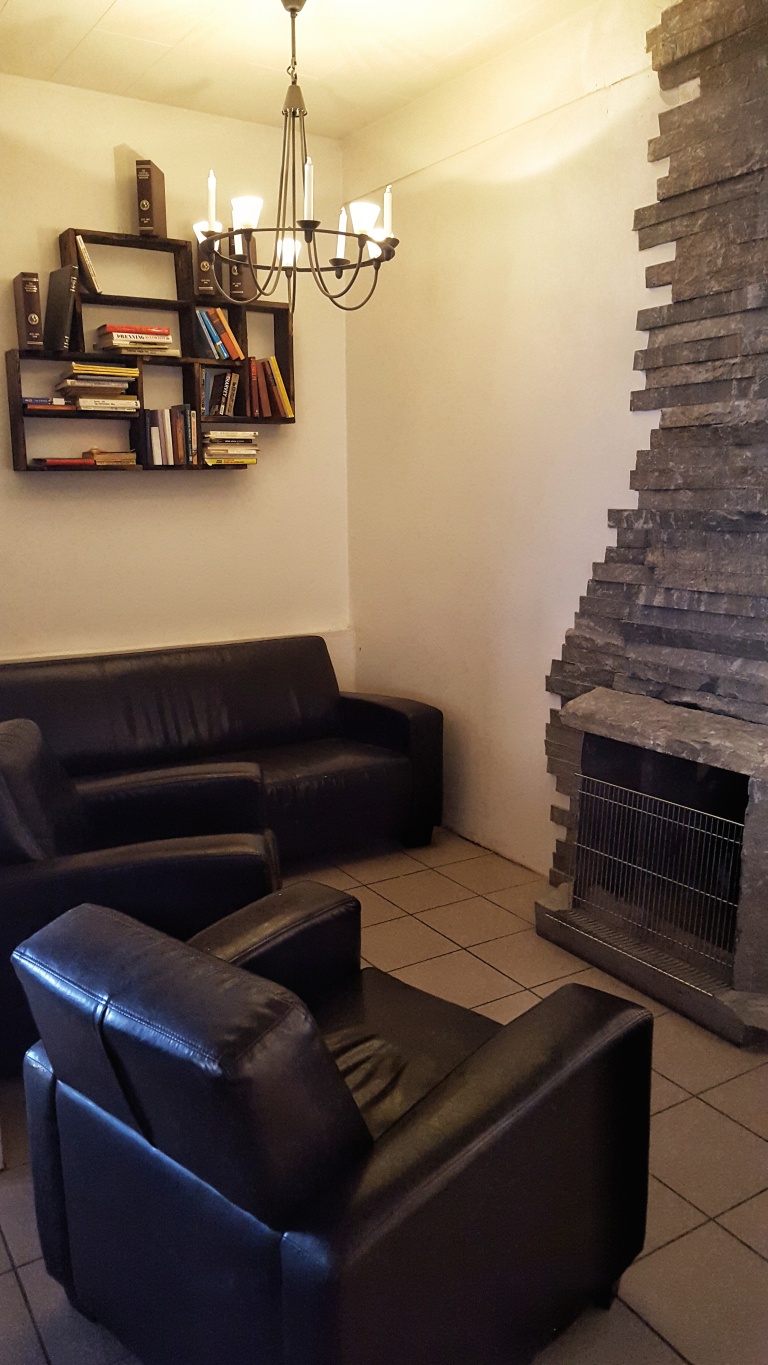 There are just four rooms at Hotel Ljósaland, sleeping a total of eight guests. The rooms are in a cabin separated from the main hotel building, and each pair of rooms shares a big communal living space. This space offered a little kitchenette (can you call it a kitchenette if it doesn’t have a sink?) with a fridge, toaster, microwave and a coffee machine. Disposable plates, cups and cutlery were all provided too, which was handy. And a few condiments, presumably left by past guests, were also tucked away in the drawer.

Next to the kitchenette was a dining table and chairs, and next to that was a pair of big brown sofas and a low coffee table. The coffee table was my favourite feature of the room; it was made out of a reclaimed door (very similar to the dining table at an Airbnb in the Dominican Republic that I stayed in last year), and covered with pamphlets and leaflets of attractions in the Westfjords area and beyond.

Much like the communal space, our bedroom was neutrally decorated and basically furnished: two single beds, a desk and chair, some bedside tables made out reclaimed wood (again, just like the Airbnb in Santo Domingo) and a shelf with a little portable TV.

The twin beds were high (so high that I couldn’t put my feet on the floor when I sat on the bed), and very comfy. The mattress was one of those orthopedic ones, covered it little bumps. “To massage your back,” said Bjorn as I pulled back the thick, feather-filled duvet to reveal this weird mattress. I tell you, though it might have looked like dimply orange peel, those two nights were the best sleep I’d had in over a year. 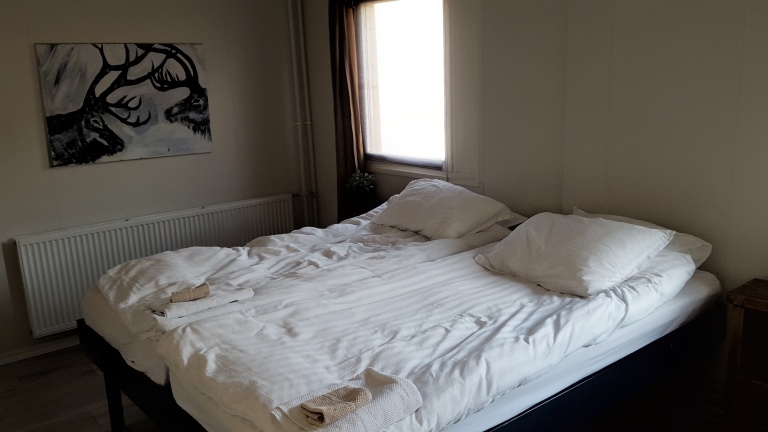 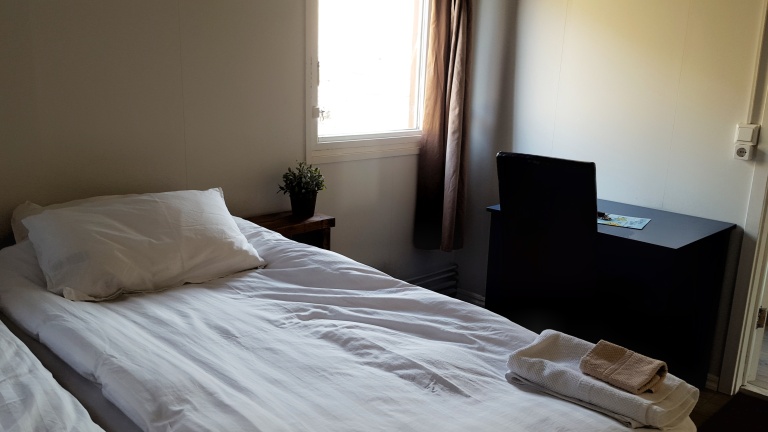 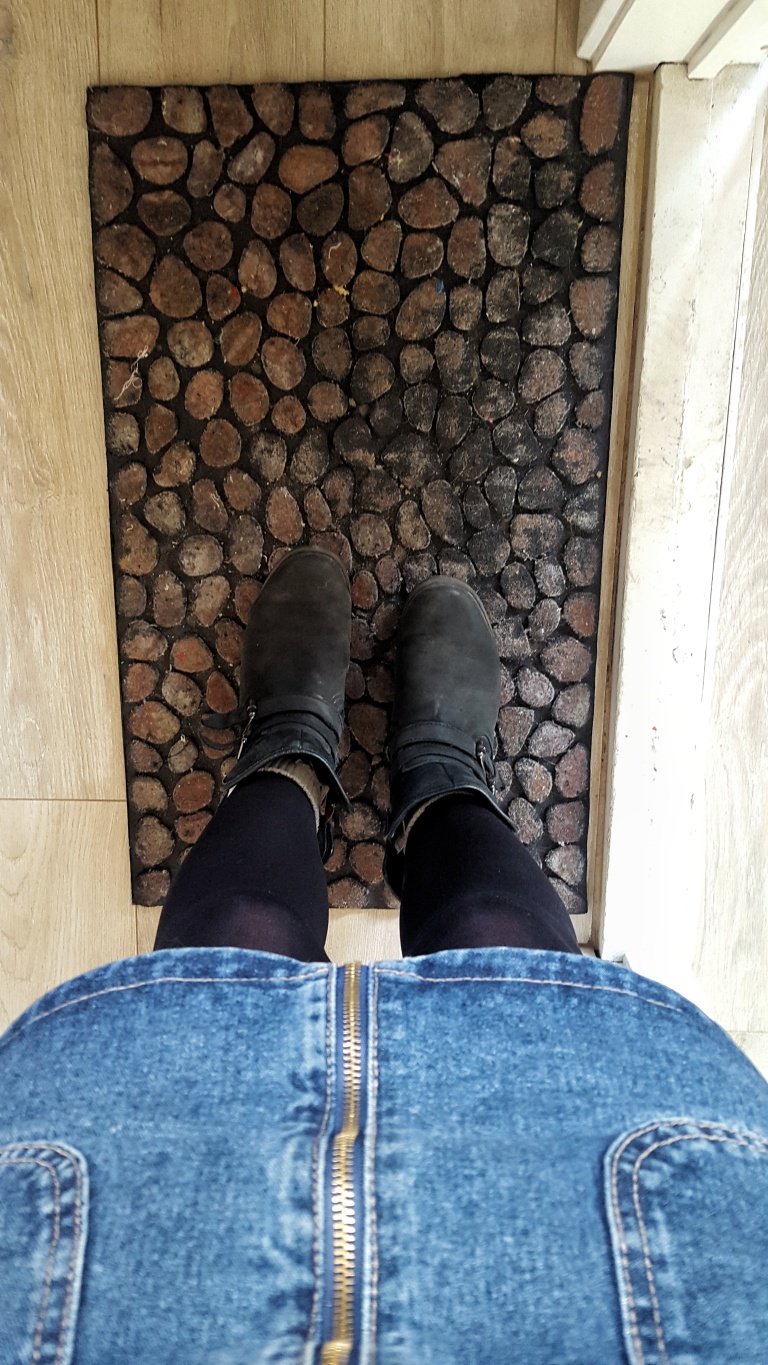 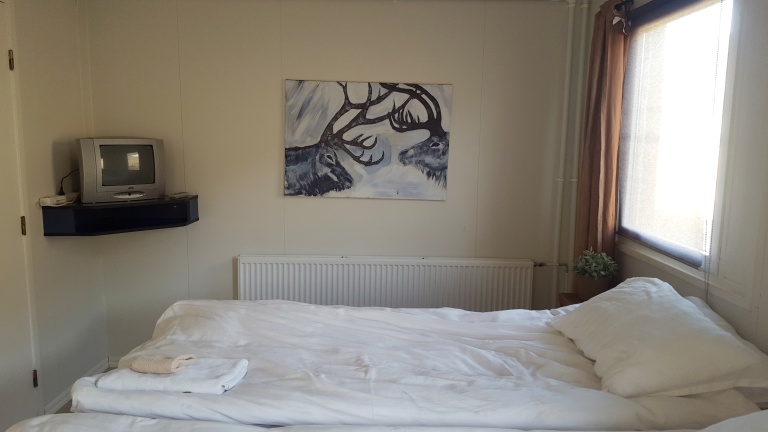 One thing I would say, the wall between our room and our cabin neighbours’ room was quite thin. This wasn’t an issue at night time, as I think the neighbours were fast asleep by the time we got back to the room, showered up and climbed into bed. However, in the morning, when we were trying to have a bit of a lie-in, we could hear everything they were doing in their bathroom. Not the best thing to wake up to, but it did give us a giggle.

Speaking of the bathroom, it wouldn’t be an AlwaysCarryOn.com hotel review without a shot of the khazi. So here it is, the wee en suite to our room: 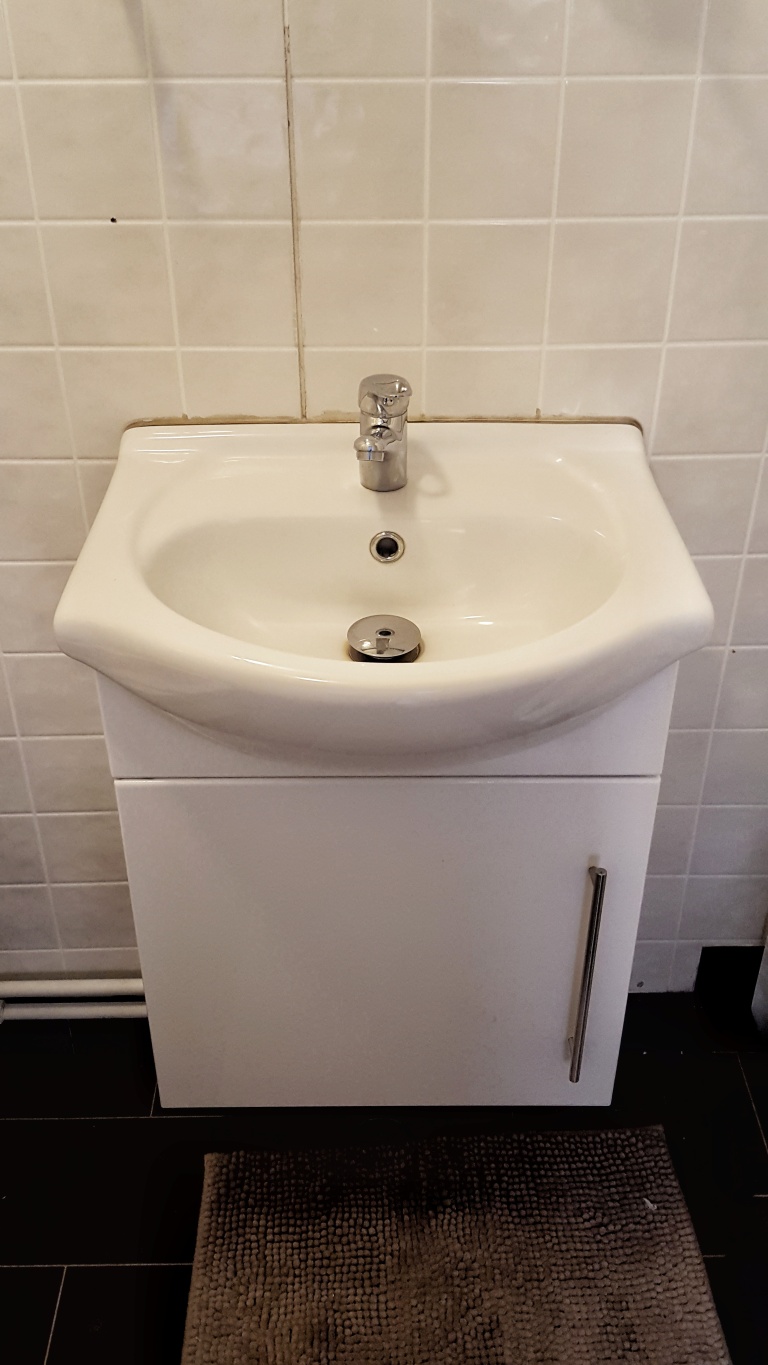 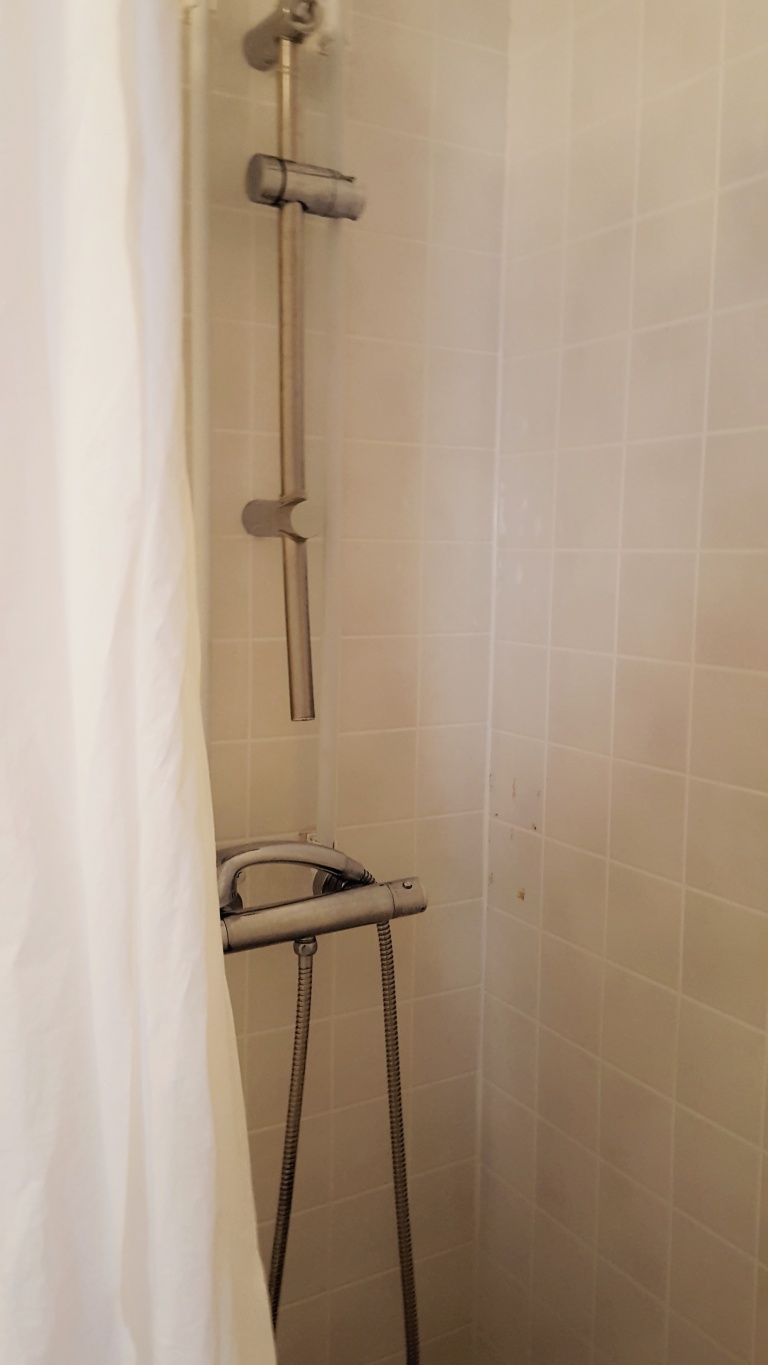 It wasn’t the cleanest of bathrooms (there was a few patches of mold in places, but meh, who cares about that), but it was functional. And the shower was one of the best showers I’ve had in a long time – it was super powerful, and the water made my hair really soft.

Well, there wasn’t much in the way of leisure facilities at the hotel, as I think most of the “leisure” is outside exploring the wilderness. That said, there was a games room in the main hotel building, with a big widescreen TV, a pool table, some board games, a laptop set up and playing Spotify, and

If you’re looking for something more though, there’s a public swimming pool in nearby(ish) Reykhólar, which we visited on day 1 of our road trip. 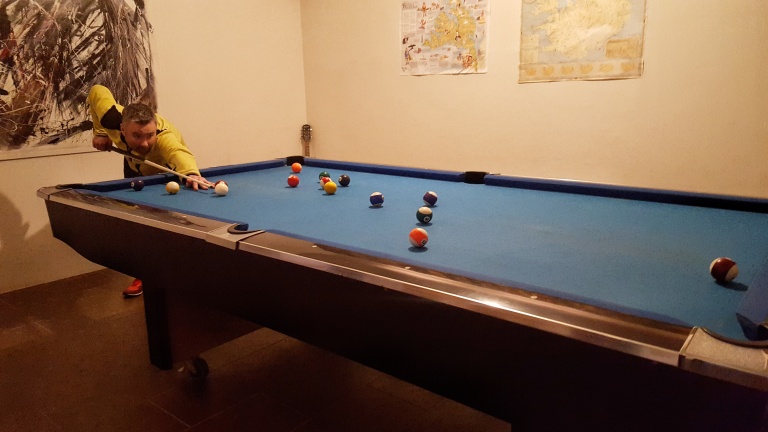 Food and drink at Hotel Ljósaland.

We only ate in the hotel on our first night, but what we ordered was alright. Nothing to special, but it filled a hole as we were both super hungry after a full on day of driving and exploring.

We shared a bowl of onion rings to start. These came out piping hot (presumably straight from the deep fat fryer) but were really tasty. And then Björn had a burger and chips, and I had a sandwich and chips. The chips were sweet potato fries, not normal chips – though I didn’t mind this, as I actually really like sweet potato fries.

What I did mind though was the jalapenos, or rather lack thereof, in the sandwich. Anyone who knows me knows I like my food spicy (really spicy), so if there’s anything with chilies or jalapenos on the menu, I’ll order it. But this sandwich’s level of spice was disappointing – it had just one jalapeno cut into little bits and sprinkled throughout the sandwich. If we hadn’t been the only customers in the restaurant, I might have asked for more jalapenos to be added, but I did feel bad that it was so quiet there (especially as I’d already asked for some mustard and they didn’t have any in the kitchen, so had to run over to their house to get some from their own personal fridge). 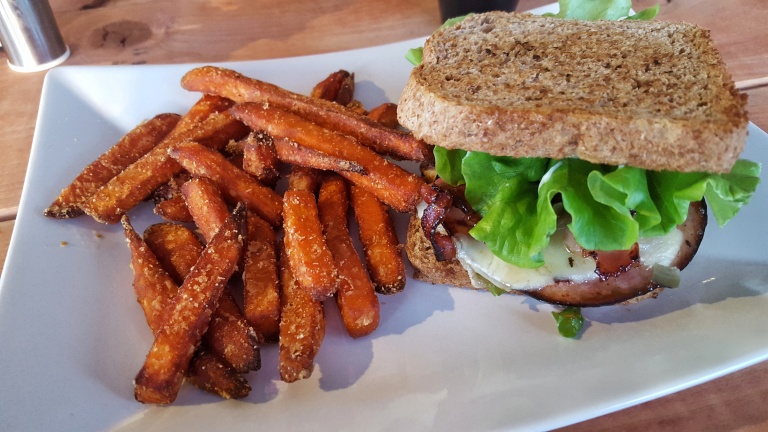 Breakfast is available at the hotel, and when we arrived we were asked if we’d like to add it on to the room price, at 15€ per person per day. But when doing some research before I reserved the room on Booking.com, I noticed quite a few negative comments about the breakfast offering, so we decided to steer clear and bought some bread and spread with us for toast.

Tips for staying at Hotel Ljósaland.

Here are a few things to bear in mind if you’re going to stay at Hotel Ljósaland:

If you’re planning a trip to explore the Westfjords area of Iceland, and want somewhere affordable and comfortable to stay, then you can’t really go wrong with Hotel Ljósaland, in my opinion. It’s conveniently situated for visits to Hólmavík, Reykhólar, Búðardalur and Djupavík, and is easy to find off the main road. The rooms at the hotel, though basic, were a decent size and clean. And they had a private en suite bathroom.

I know that a hotel this small and secluded won’t be to everyone’s taste – but really, if you’re looking 5 star luxury, then maybe the Westfjords isn’t an area you should be heading to anyway? Because, with some towns we drove through having a total of just seven houses, you’re going to struggle to find a Hilton, Sheraton or Embassy Suites.

Disclaimer: We stayed at the Hotel Ljósaland, Westfjords from Thursday 29 March 2018 to Saturday 31 2018 in a standard twin room on a room-only basis. The hotel was booked through Booking.com and cost 155,000 ISK/£108 for two people for 2 nights. The stay was paid for by myself and this review has been written by me.