Usually when I’m away, a day or two before I’m due to head home, I get sort of sad that the trip is coming to an end. It’s a dull, depressing feeling, which tends to hit hardest when I’ve had an absolutely amazing time. To me, going back to “9 to 5 normality” after a few days, a week, a fortnight exploring somewhere new is like an adult version of going back to school in September after six weeks off during the summer.

At the end of day 2 of our Westfjords road trip, that feeling started to creep up on me. Björn and I had had so much fun exploring this beautiful part of Iceland – we’d visited some of the most remote villages in the region, driven through different landscapes, relaxed in natural hot springs and learnt about “interesting” local legends. I didn’t want to check out of our cosy little room at Hotel Ljósaland, because that would mean the adventure was coming to an end.

Except it wasn’t the end, not quite anyway. We still had the drive back to Reykjavík, for which Björn decided we’d take the longer, scenic route, so we could see some sights that we hadn’t on the first day of our road trip. The sunshine made the whole day so much nicer too (especially when I found out there was torrential rain back home). So here’s what we got up to on our way back from the Westfjords… 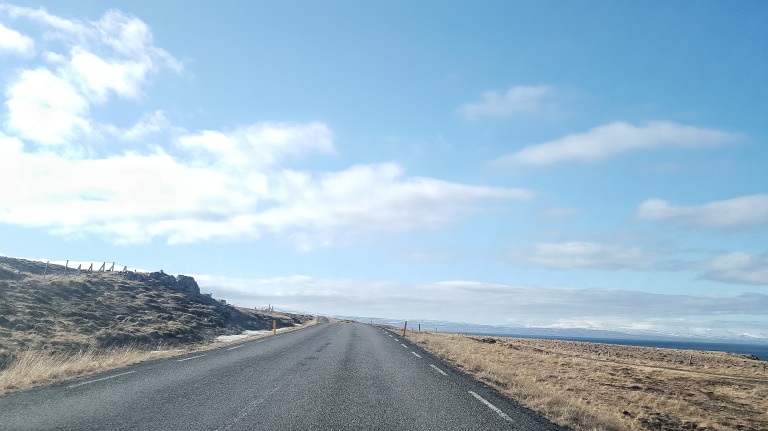 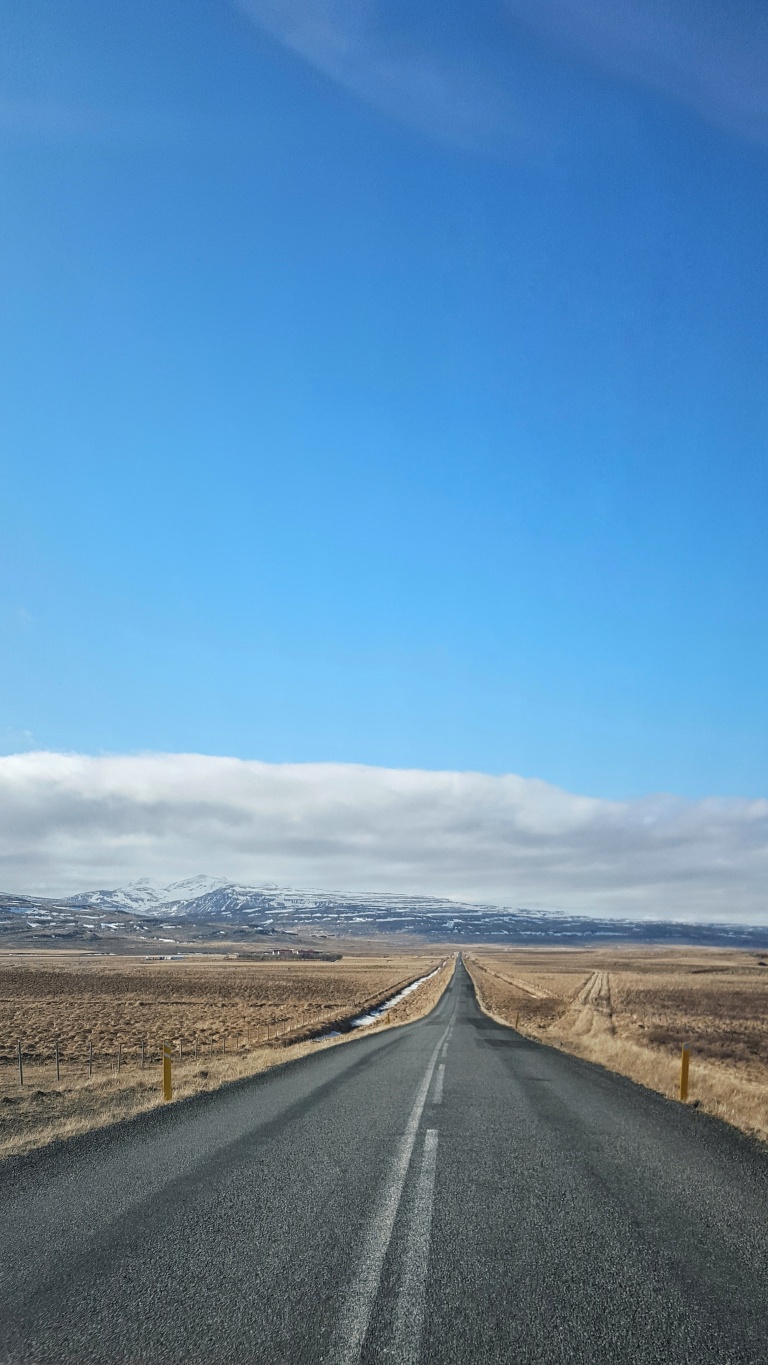 A quick stop for breakfast in Búðardalur.

Though not usually a breakfast eater at home, when I’m on holiday or travelling I do sometimes grab something in the morning, even if it’s just a coffee. Knowing that we’d be on the road for a little while before we’d have the chance to eat and drink again, Björn suggested we stop at the supermarket in Búðardalur to get some pastries and drinks. It was en route anyway, so made sense.

But what did I fancy? I wasn’t particularly hungry, so though not knowing what was in it (other than strawberries and bananas, obviously), I picked up a carton of something from the fridge, hoping it was some sort of milkshake:

It was kind of like a thin, drinkable yogurt. Very tasty. If you’re ever in Iceland and fancy trying something new, I recommend this (though after I’d downed it, Björn did tell me it’s what body builders drink to bulk up).

While Björn was queuing to pay for our sustenance, I had a nosy around the shop. As the only store for miles, it sold pretty much everything. From coal and fire logs to utensils and pots and pans, I couldn’t believe there were so many things in just one small shop. There was a whole area of the store with floor-to-ceiling shelves stuffed with balls of wool.

Though I saw Icelandic horses on day 1 of our road trip, I’ve still not seen any of the country’s famous sheep. But I’ve read about them and how hardy they are. With the isolation that comes with living on an island, the Icelandic sheep is one of the purest breeds of sheep in the world, with a strong immune system and thick fleece, according to my guidebook.

Their fleece is “dual-coated” with internal and external layers. In Icelandic, the long external coat is called “tog” and the fine internal coat “þel”. When sheered and separated, the two coats are used for different woolen products. The external fibres are long, shiny, durable and waterproof, while the internal ones are delicate, soft and insulating, so give good protection against the harsh Icelandic weather. Once turned into balls of wool, both are used to make the beautiful jumpers I kept seeing.

I would have loved to have bought some wool back for my mum, as she’s a big knitter and crocheter (is that even a word?), but much like everything else on the island, wool was super expensive. 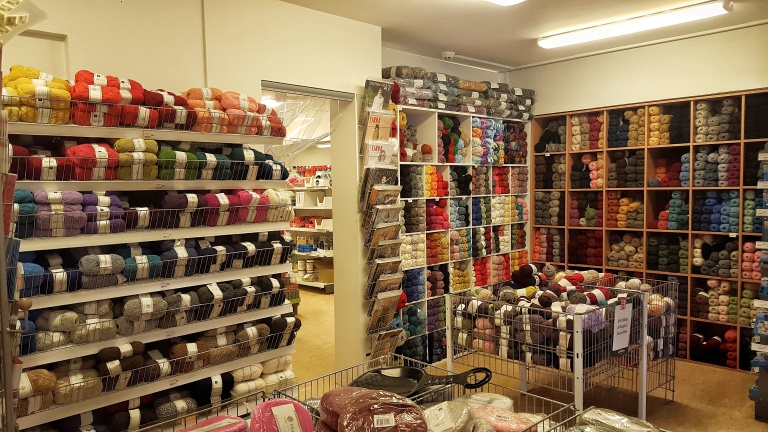 Driving through the Snæfellsnes Peninsula.

Once back in the car, Björn turned on the sat nav and we headed off, taking the “scenic route”. And scenic it was: we drove part way through the Snæfellsnes Peninsula.

Icelanders often say the Snæfellsnes Peninsula is the only part of this beautiful country that lets you see all of the island’s unique natural elements in close proximity to each other. In other words, Snæfellsnes has everything from vast lava fields, sparkling blue fjords, tall ice-capped volcanoes, glistening glaciers, black (and white) sand beaches and hazardous, jutting sea cliffs along the coastline. The area is crowned by the mighty Snæfellsjökull, which you may remember from French author Jules Verne’s Journey to the Centre of the Earth.

Unfortunately we didn’t go to the volcano, as we only had a few hours to get back to Reykjavík (Björn had to submit a university paper). But I’d love to head back to Snæfellsnes one day. The landscapes were breathtaking, even if only viewing them through the car window.

About half way back to Reykjavík we made a pit stop in Stykkishólmur. With a population of about 1,100 people, it’s the largest town in the area, built up around a natural harbour tipped by a basalt islet. It’s a picturesque place with a laid-back attitude and a sprinkling of colourful buildings from the late 19th Century. Cute, compact and very clean, Stykkishólmur was definitely one of my favourite places we visited on our Westfjords road trip. It also featured in the Ben Stiller film The Secret Life of Walter Mitty, which I watched for the first time on my flight home from the Dominican Republic last October. Little did I know that six months later I’d be at one of the filming locations.

Once parked, we popped into Narfeyrarstofa for some much-needed caffeine. Located by the Breiðafjörður Bay in the oldest part of Stykkishólmur, I was surprised to read that he restaurant had only been open since 2000, as the colonial style exterior looked quite old-fashioned.

Inside the decor was that traditional-yet-modern Nordic style, with sheepskin rugs thrown over benches, and wood panelling contrasting against clean white walls. The menu was eclectic, with lots of fresh fish and seafood on offer, as well as some Asian-style dishes. While we didn’t order food ourselves, the busy restaurant was filled with hungry diners munching their way through some tasty looking dishes. 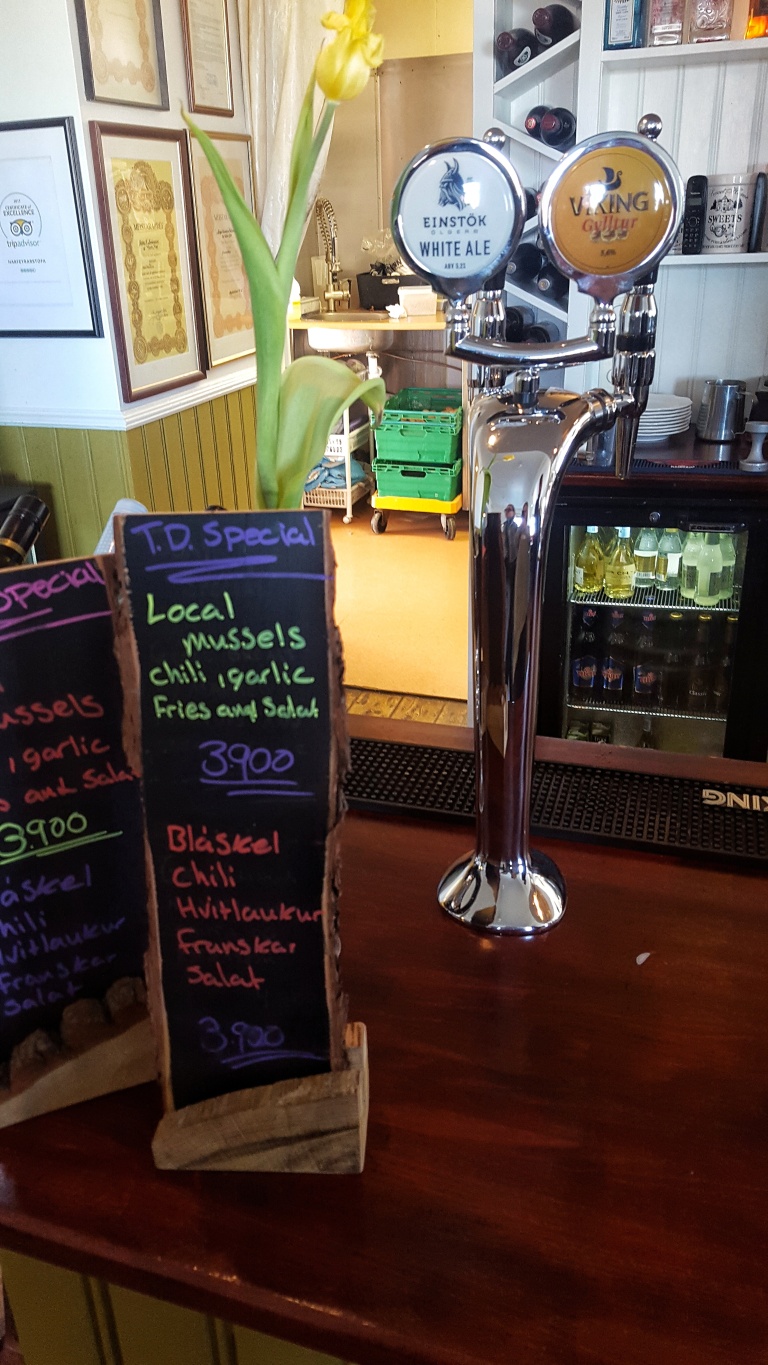 A drive around Stykkishólmur harbour.

Both the council and the inhabitants of Stykkishólmur are exceptionally environmentally conscious, and along with the four other municipalities on the Snæfellsnes Peninsula, Stykkishólmur was the first community in Europe to get the EarthCheck environmental certification (read this interview with Lína Björg Tryggvadóttir, Project Manager for EarthCheck to find out more). This means Stykkishólmur operates in the most eco-friendly way possible, continually measuring various environmental indicators.

The town was also the first municipality in Iceland to start fully sorting its waste, the first town to become plastic bag free, as well as the first town in Iceland to receive the prestigious Blue Flag eco-label for its harbour. Oh, and it’s been an European Destination of Excellence (EDEN) since 2011. So all in all, Stykkishólmur is a pretty great place to be.

Speaking of the harbour, look how cute it is? The water was clear and calm; I could have stayed and watched the boats for hours had we not been in a rush to get back to Reykjavík. 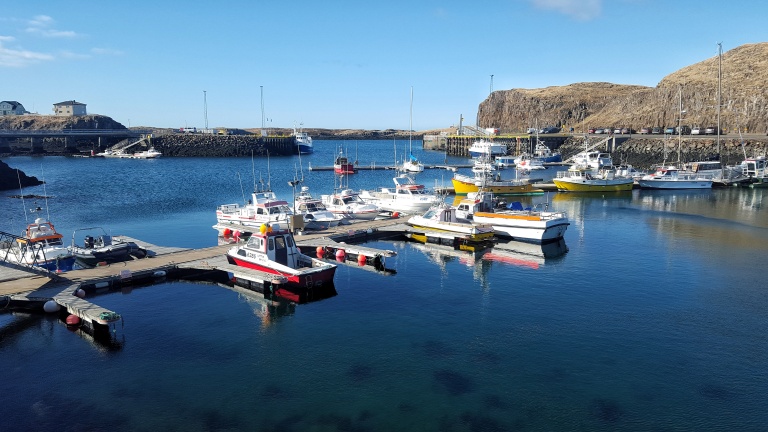 A stop at Stykkishólmur church.

As soon as we entered the town of Stykkishólmur I immediately spied what I originally thought was some kind of mast for a ship moored up by the seafront. But as we drove through the town and I got a better view, I realised it was some kind of concrete structure. “What’s that big thing sticking up over there?”, I asked Björn. “Where, what thing?” I pointed at the white ship-like shape poking over the rooftops of houses, and following my finger, Björn replied: “That’s just a church. Sometimes they have concerts in there though”.

The church in Stykkishólmur is definitely an interesting building to look at. With it’s brilliant white walls and elegant architectural style, Stykkishólmskirkja, as it’s called in Iceland, is one of the most beautiful churches I’ve ever seen. From the outside at least anyway, as we didn’t have time to go inside (plus it was Easter Saturday, so it might not really have been appropriate to have gone marching in, mobile in hand, snapping away).

Located right by the sea, this unique building was inaugurated on 6th May 1990. It was designed by the Icelandic architect Jón Haraldsson, and the altarpiece was painted by Icelandic painter Kristín Gunnlaugsdóttir. The altarpiece shows Mary carrying the child Jesus, though I’ll have to take my guidebook’s word for that. The guidebook also said the church is renowned for its fine acoustics, and often plays host to musical events. Summer recitals are conducted by The Friends of the Arts Society Stykkishólmrkirkja every summer. Maybe one day, if I visit Iceland again, I’ll head back to see inside and test out the acoustics myself… 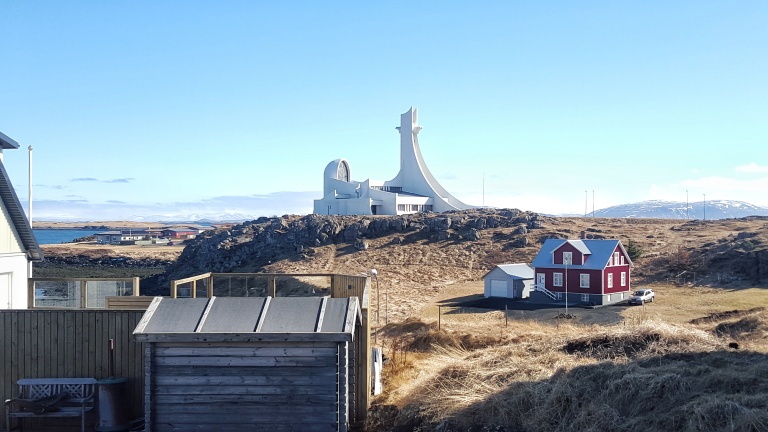 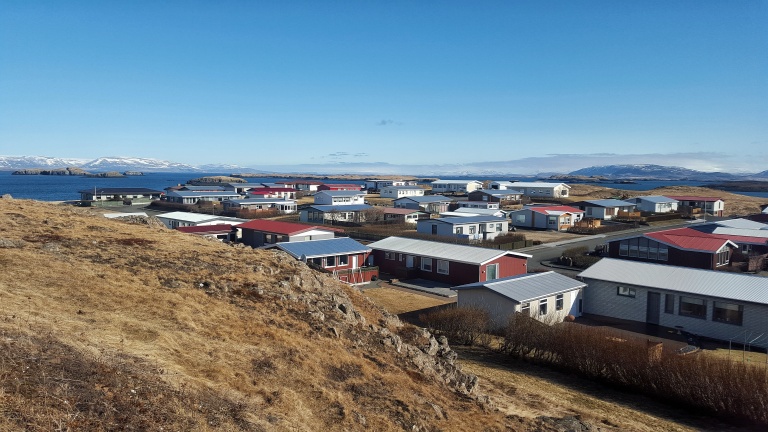 Once back on the main road out of Stykkishólmur, we headed for home (or rather, Björn’s apartment). As I mentioned, I was a little upset that our mini adventure in the Westfjords had come to an end. But as I still had a couple of days in Reykjavík before flying back to London, the blow was softened somewhat. Plus Björn had hinted about visiting me in the UK, and my girlfriends and I had begun planning a summer holiday.

With more trips on the horizon, I was never going to stay down for long…

103 thoughts on “Our road trip from Reykjavík to the Westfjords – day 3.”