Winnie was the first whale I ever saw in the flesh – or perhaps that should be “in the blubber”?

Not that my four-year-old brain had any concept of size back then, but Winnie was a 14.5ft long killer whale, weighing a little under 2 tonne. She performed up to seven times a day in the Windsor Safari Park dolphinarium pool, which was 85ft long, 46ft wide and 11.5ft deep.

When she wasn’t entertaining the “Great” British public, Winnie was kept in a side pool that was just twice her length (32ft long, 25ft wide and 9.5ft deep).

The notion that it was inhumane to hold such a large, wild animal in such a small enclosure was also lost on my naive mind – as it probably was on those of many Brits in the 80s.

We didn’t need to jet off to Florida or California to see the infamous Shamu show at SeaWorld; we had Windsor Safari right on our doorstep. And the chance to see a real whale, in person, was one that couldn’t be missed. Seeing a whale was a dream.

Half starved (unbeknown to me at the time) and “rewarded” with buckets of fish, I watched Winnie respond to whistled commands from her trainer: she swam the perimeter of the pool, flicked a football, gave the trainer a kiss, surfed the trainer from one side of the pool to the other, waved goodbye to everyone, then came back as an encore to splash those sat in the Splash Zone with a predictable-but-still-surprising belly flop.

There were cheers and clapping, then we left. Herded into the gift shop, I was allowed to pick one souvenir – I chose a small Winnie stuffed toy.

Though I still have my Winnie toy nearly 30 years later, my memory of her performance is hazy. I don’t remember how many people sat on the benches watching the show with me that day – but reading up on the history of Windsor Safari Park while writing this post, I doubt it was many. 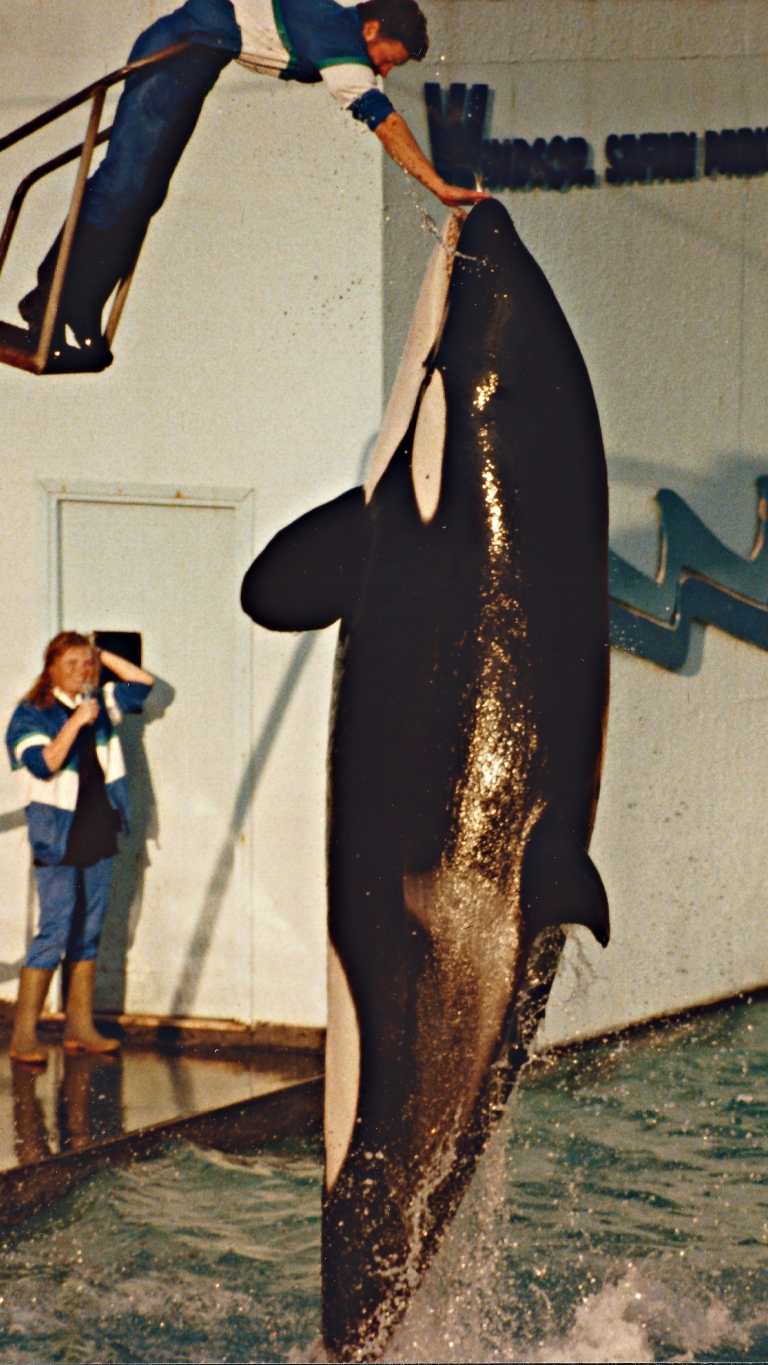 The beginning of the end for Windsor Safari Park.

Originally opened in 1969, visitor numbers to the Park had been dwindling since the mid 80s. More and more families holidayed abroad during the summer months, and those that didn’t chose days out at amusement parks over zoos and safaris.

Mounting pressure from animal activists and Greenpeace lobbyists didn’t help the situation either.

Windsor Safari Park could not compete. And following the success of animal rights campaign “Into The Blue”, the UK government made standards of care for marine mammals in captivity so stringent, no dolphinarium in the country could afford to meet them. So, one by one, they shut down.

The strict new regulations about the size of pools meant star attraction Winnie – who had resided at Windsor since 1977 – had to find a new home. The Park didn’t have the funds to extend her enclosure, so she was shipped to SeaWorld Orlando in 1991.

Unfortunately Winnie’s tragic life didn’t get much better across the pond; the submissive orca was bullied by younger whales that were much bigger than her. Experts said that being kept in such a small pool in Windsor had stunted Winnie’s growth during her early years, though she did gain some weight in the US (doesn’t everyone?).

Winnie sadly passed away in 2002; a necropsy found that she’d consumed over 12lb of indigestible debris (including British coins and broken tiles from the tank in Windsor) during her 26 years, which caused her intestines to become blocked and stop working.

What happened to Windsor Safari Park?

Well, without Winnie there were no visitors, and without visitors there was no money coming in. The Park opened its gates for the last time on Sunday 25 October 1992, and was then taken into receivership the next day. Its owners owed debts of £40million, and without a benefactor willing to swoop in and give the Park a vital cash injection, it closed indefinitely.

Some of the animals – which included 34 lions, seven elephants, 45 baboons, seven tigers, 13 wolves and eight dolphins – were rehomed at other zoos and safari parks around the UK. Sadly, however, newspaper coverage at the time reported that the animals that couldn’t be rehomed (because of old age or illness) were euthanised. With no dolphinariums left in the UK, Windsor Safari Park’s dolphins went to the Netherlands.

Fast forward four years and the gates to the Park were once again open, though in an entirely new guise. The animals that once lived there were forgotten, and the whale shows that had entertained families for over three decades were a distant memory. Windsor Safari Park had been completely redeveloped into, what is now, the UK’s most visited theme park: Legoland Windsor.

The only animals on display now are those made from colourful, plastic bricks – proving that the British public don’t want or need performing orcas and marine mammal acrobatics as a form of entertainment.

I’m from a family of animal lovers. I grew up surrounded by dogs, cats, rodents, fish and birds (there are currently chickens and turtles at my parents’ house, too).

While my school pals idolised pop stars and watched Byker Grove, Grange Hill and the latest Disney movies, I was watching The Animals of Farthing Wood, Animal Hospital and films like Ring of Bright Water. When I was older I wanted to be Michaela Strachan or Virginia McKenna, rescuing and rehabilitating animals. As mentioned in a previous post about the charity Save a Gato, I even named my first pet – a little white kitten – after Elsa the lioness from the Born Free trilogy.

Another childhood favourite was Free Willy; I wore the VHS out watching it over and over. Even now as an adult, the fictitious story of Jesse’s commitment to helping his 4.5 tonne (notice the difference in size between him and Winnie) cetacean friend escape captivity and return to the open ocean has me on an emotional roller coaster, with tears of joy and sadness interspersed with feelings of anger and triumph.

The end scenes of Willy swimming freely with a pod of wild killer whales have stuck in my mind for over 20 years. Ever since I first watched the film, going whale watching to see these magnificent creatures in their own environment – not just from the confines of what amounts to a giant bath tub – has been on my bucket list. 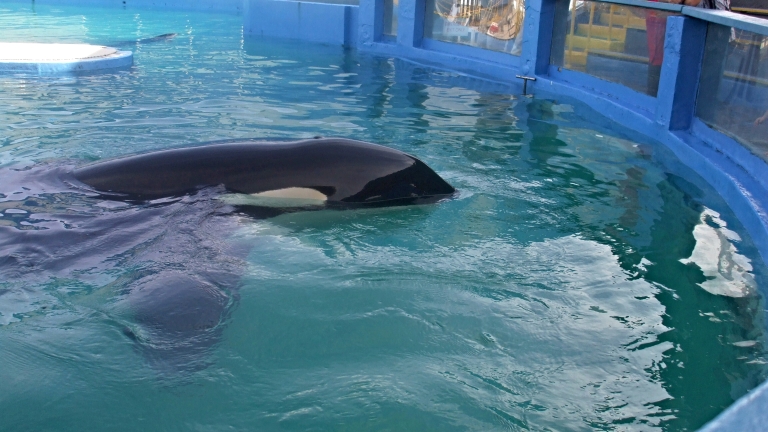 Though I’ve never been to an official SeaWorld park (and have now vowed I never will), in 2009 my parents and I visited Miami Seaquarium on a family holiday to Florida. I do recall niggles of guilt at the back of my mind for being a person who paid money to keep a 22ft long orca in a tank, but the presenter did a great job in convincing everyone that the huge mammal was happy and content. So I watched Lolita the killer whale splash around her pool entertaining the visitors, reminiscing about my childhood trip to Windsor Safari Park.

It’s only as an adult, as I read and learn more and more about travel and the tourism industry, that I truly understand what animals in captivity go through, and how our entertainment is so often at the expense of the animal’s health and mental well-being. Last year for example, as Hurricane Irma ravaged the US East Coast, drone footage emerged of an abandoned Lolita, left alone and exposed to the elements, with no shelter from falling debris. My anger at Miami Seaquarium, and my own remorse at having visited somewhere that treats animals so inhumanely, is insurmountable.

Bad enough that captive orca exist, but unlike other animals they can’t be evacuated during #Irma. Barbaric that Lolita has been abandoned. pic.twitter.com/jDLbIq9lw3

Recently I watched a documentary on the real Free Keiko story and found out about the Free Willy-Keiko Foundation set up by Warner Bros. If you’re interested, you can watch the documentary here, but word of warning, have tissues at the ready.

But it was an unpredictable and overwhelming documentary on Netflix that I watched in 2013 that really changed my mindset:

Low-budget documentary Blackfish had a far greater impact than its producers and director ever thought it would. It opened the public’s eyes to the way captive killer whales (and other cetaceans) are treated, housed and cared for.

The film drew wider attention to Dawn Brancheau’s death in 2010. Dawn was SeaWorld’s most experienced trainer, working with Tilikum, the company’s biggest killer whale (and the largest captive orca in the world until his death in January 2017). During a routine show she was pulled into the water by 6.7 tonne Tilikum and drowned, while a traumatised audience looked on. Blackfish revealed that Dawn’s was not the first death linked to Tilikum, however. If you haven’t seen it, the documentary is available on Netflix and well worth a watch.

After the film’s release in June 2013, mounting protests against the holding of orca in captivity, an overnight drop in share prices and the continued decrease in visitor numbers saw SeaWorld report a loss of $25.4million in the fourth quarter of that year. And as of January 2017, SeaWorld’s shares have dropped by half since 2013.

While the downturn of the American institution’s fortunes can almost entirely be ascribed to Blackfish, SeaWorld has responded to public pressure. In March 2016, it announced it would end its orca breeding programme, making its current captive killer whales “the last generation of orcas in SeaWorld’s care”. In an attempt to rebrand from an entertainment company to a conservation company, it also announced it would be phasing out the daily theatrical performances and introducing “new, inspiring, natural orca encounters, focusing on orca enrichment, exercise and overall health.”

It hasn’t just been SeaWorld which has been caught up in the “Blackfish affect”, though. Other businesses in the tourism industry have also responded to the public backlash; in July 2014, Southwest Airlines stated it would not be renewing its partnership with SeaWorld. And most recently, (my favourite) British travel company Thomas Cook announced it would stop selling tickets to SeaWorld as part of its holiday packages.

Like many others that have watched Blackfish, I have vowed firmly to never again pay to watch whales, dolphins and other marine animals perform.

My dreams of seeing these majestic creatures in their natural environment are very much still alive, though. And through everything I read about various species becoming endangered (or worse, extinct in the wild), I’m even more determined to tick whale watching off my bucket list, before it’s too late.

In fact, it very nearly happened earlier this year. When I was in Iceland at the end of March, I went on a whale watching boat trip with Special Tours. But that’s a post for another day…

Note: Windsor Safari Park photos in this post have kindly been shared by Norman Griffin, Barbara Todd and Colette Buchanan-Grey, and were all taken between 1982-89. Miami Seaquarium pictures my own, regrettably.