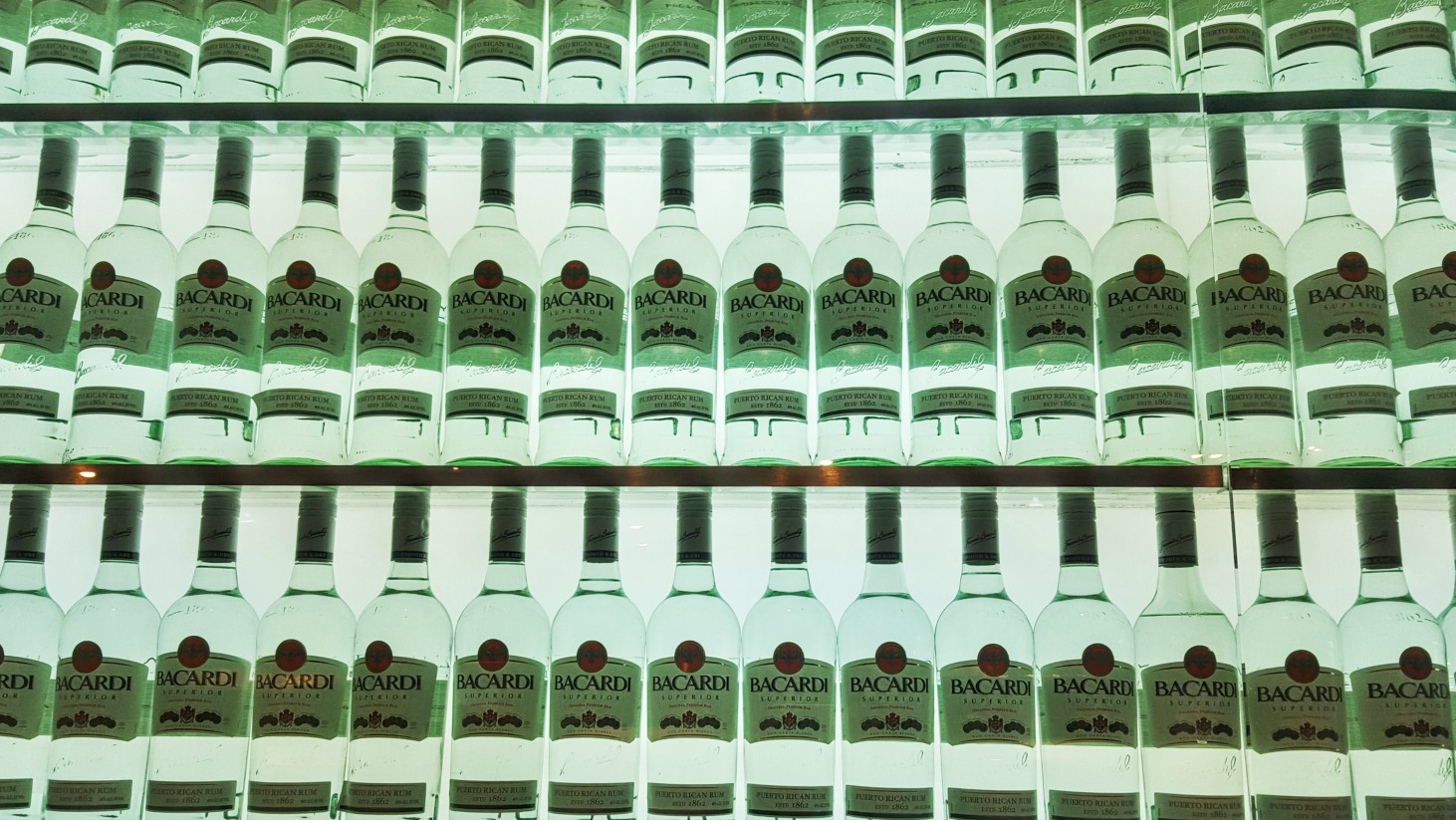 France has wine, Germany has beer, and Puerto Rico has rum.

It’s also the birthplace of one of my favourite cocktails: the Piña Colada. So when visiting the country earlier this month, of course I had to have a Piña Colada (or two), washed back with one of the Caribbean country’s other favourites, a Cuba Libre. I also had to visit Bacardí headquarters – it would have been rude not to, especially as they were only a five minute drive from my hotel in Levittown. 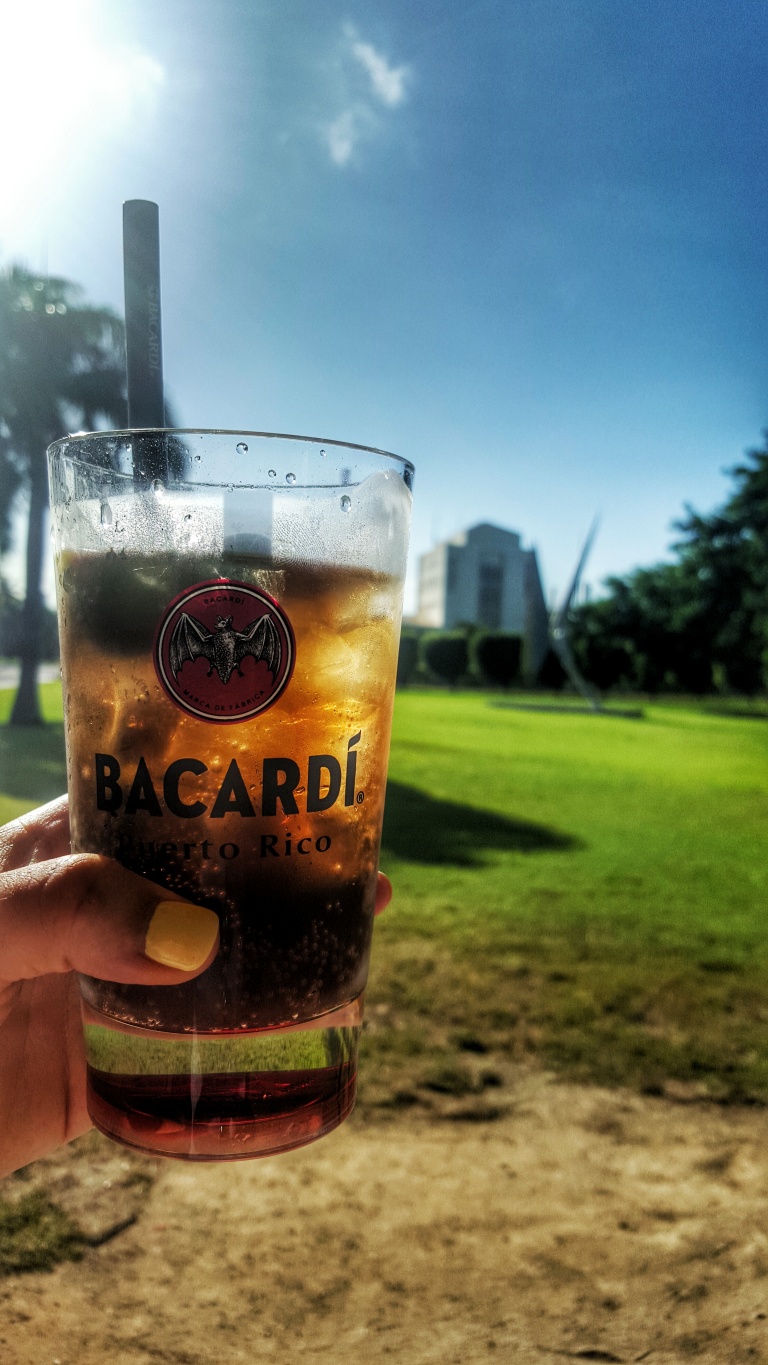 The Bacardí distillery tour is a must-do if you’re in Puerto Rico, even if you’re not a massive fan of rum. There is a lot to see, do and taste, and muchos to learn about the company that produces the world’s most acclaimed rum.

I opted for the historical tour, which lasts about an hour and a half, and gives you a free welcome cocktail (in a souvenir plastic tumbler) and a guided tour of Casa Bacardí. I also got a pair of very snazzy Bacardí sunglasses, as the hotel gave me a coupon before I set out that morning (it’s definitely worth checking with your hotel if they have these coupons – there were a range of free gifts available, depending on the coupon you had).

So, apart from the fact that Puerto Rico is the rum capital of the world, what did I learn about the drink and the Bacardí company while I was on the tour? Well I was surprised to discover that the rum that’s so proudly Puerto Rican (“aged, filtered and blended in Puerto Rico” reads every bottle), was actually created in Cuba, by a Spaniard. Here’s how the story goes:

Ok, so you know this one already, but Bacardí rum was actually born in Cuba, not Puerto Rico. Following a long, hefty labour, that renowned taste of the Caribbean began life on 4 February 1862. It was a birth that changed the world of rum-making.

Founder Don Facundo Bacardí Massó immigrated from Spain to Santiago de Cuba in 1830, where he set himself up as a wine merchant. Within a few years though, heady by the heat of Havana, he began experimenting with the distillation of rum.

Working with close family members, years of trial and error helped Facundo Bacardí Massó make a breakthrough that revolutionised the manufacture of rum, and eventually transformed it from a local Caribbean bevvy into an internationally consumed spirit.

The new-and-improved rum was welcomed by the Cuban locals, who until then had known only the fiery local tipple “Aguardiente” (which I drunk plenty of in Colombia last year – trust me, it’s a killer). They loved the taste of Bacardí’s smooth, mixable rum, which was branded with an elegant and intriguing black bat on the label. The Bacardí business boomed, and the family profited.

In 1920, Prohibition saw the company and Cuba benefit from an influx of Americans to the island, all looking for a stiff drink and a good party. With Cuba’s thriving economy and cosmopolitan culture, hazy Havana nights became a “thing”. But life wasn’t always rosy. The Bacardí family faced major adversities: a fire, earthquakes, disease and financial distress. They persevered however, and ended up moving the distillery to Puerto Rico in 1936.

Relations between the company and Cuba soured in 1960, when the Bacardí operations were nationalised by the government, following the Communist takeover. And Facundo Bacardí Massó and his family were exiled by Fidel Castro. But by that point Bacardí had already set up shop in five other countries: the US, Mexico, Puerto Rico, Spain and The Bahamas. The company continued to produce rum, bouncing back from yet more adversity.

Going from triumph to triumph, Bacardí is now the world’s most awarded rum, selling in over 160 countries around the globe. 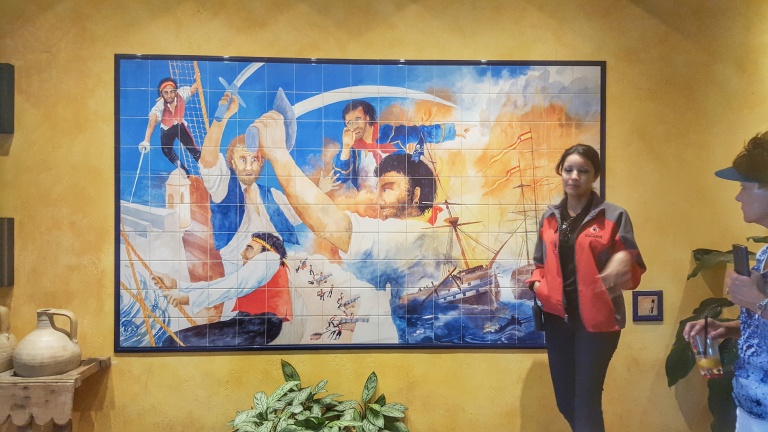 2. Bacardí owns the largest rum distillery in the world…

The Bacardí facility in Cataño, Puerto Rico, is the largest premium rum distillery in the world, covering land of 127 acres. It opened in 1936, and in 1958 Puerto Rico’s governor christened it the “Cathedral of Rum.”

Here it is in all it’s glory, isn’t it a beaut?

Over 85% of the world’s Bacardí is made in the distillery, and 100% of the Bacardí rum sold in the US is produced here. The distillery itself is huge – 20 fermentation tanks, spanning 5 floors, each holding about 200,000 litres of liquid to be distilled in copper, cast-iron and stainless-steel columns. Later, the rum ages in barrels – a whopping 460,000 of them at any given time.

3. But Bacardí rum is not bottled at the distillery…

The tour guide explained that despite the size of its operations at Cataño, Bacardí no longer bottles the rum it produces at the Puerto Rico distillery on the island. Instead, the Puerto Rico rum is shipped in steel containers to Jacksonville, Florida, where it’s bottled and labelled.

The Bacardi bottling plant in Florida produces 45,000 cases of rum every day. That’s a lot of Piña Coladas. 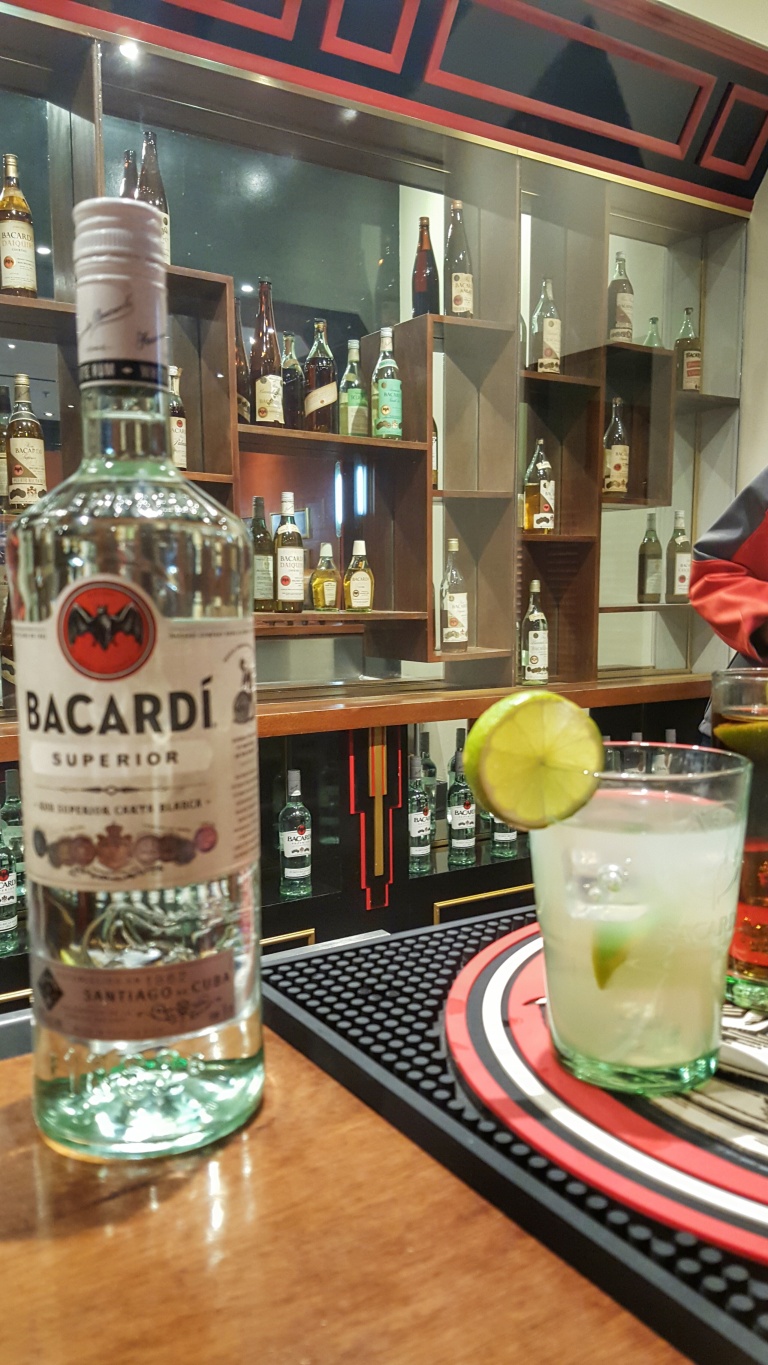 4. Some varieties of Bacardí are only available in Puerto Rico though…

Despite the rum being bottled in Jacksonville, there are two specialty types of Barcardí that are only available to buy in Puerto Rico (at either the gift shop at the Bacardí distillery or at the Bacardí shop at San Juan airport).

On the tour I got to sample Bacardí Reserva Limitada, which is aged in lightly charred American white oak barrels for ten to sixteen years. The resulting rum is a deep reddish gold colour, which has a rich, smooth taste with hints of vanilla, oak and dried fruit. It’s very, very strong. 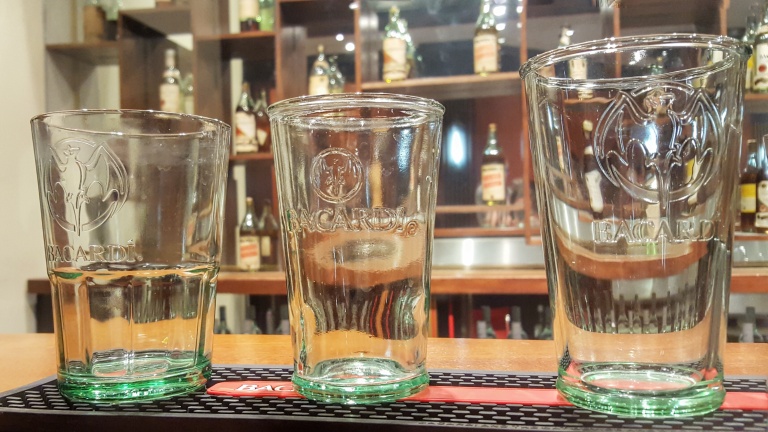 5. But every bottle features the Bacardí bat logo…

For some reason (and I think it’s because I once saw it on an episode of QI) I always thought the Bacardí logo was a bat because the company uses bat droppings in the distillation process. How wrong I was.

The truth is a lot less squeamish: the bat was used because there were bats hanging from the tin-roof distillery in Santiago de Cuba, when Bacardí first set up the business in 1862.

Apparently the bat has always been a symbol of good fortune in Catalan folklore, so when Doña Amalia Bacardí,  Facundo Bacardí Massó’s wife, spotted fruit bats in the family’s distillery, she insisted it be used as their symbol. Soon the revolutionary, smooth-bodied rum became known as “the rum of the bat.”

Today the bat is still on the bottle, helping the family survive whatever fate throws at it.

6. The Bacardí business has been in the family for seven generations.

Since its humble begins in 1862, the Bacardí business has stayed in the family, being passed down from generation to generation. The company employs over 6,000 people around the work, manufactures at 27 facilities in 16 markets on four continents, with sales in more than 160 countries.

The Bacardí Limited headquarters are no longer in Cuba, but instead in Hamilton, Bermuda. And the company has a 16-member board of directors, led by the original founder’s great-great grandson, Facundo L. Bacardí.

The information centre at the distillery in Cataño is full of original artifacts, that provide insight into the history of the company. 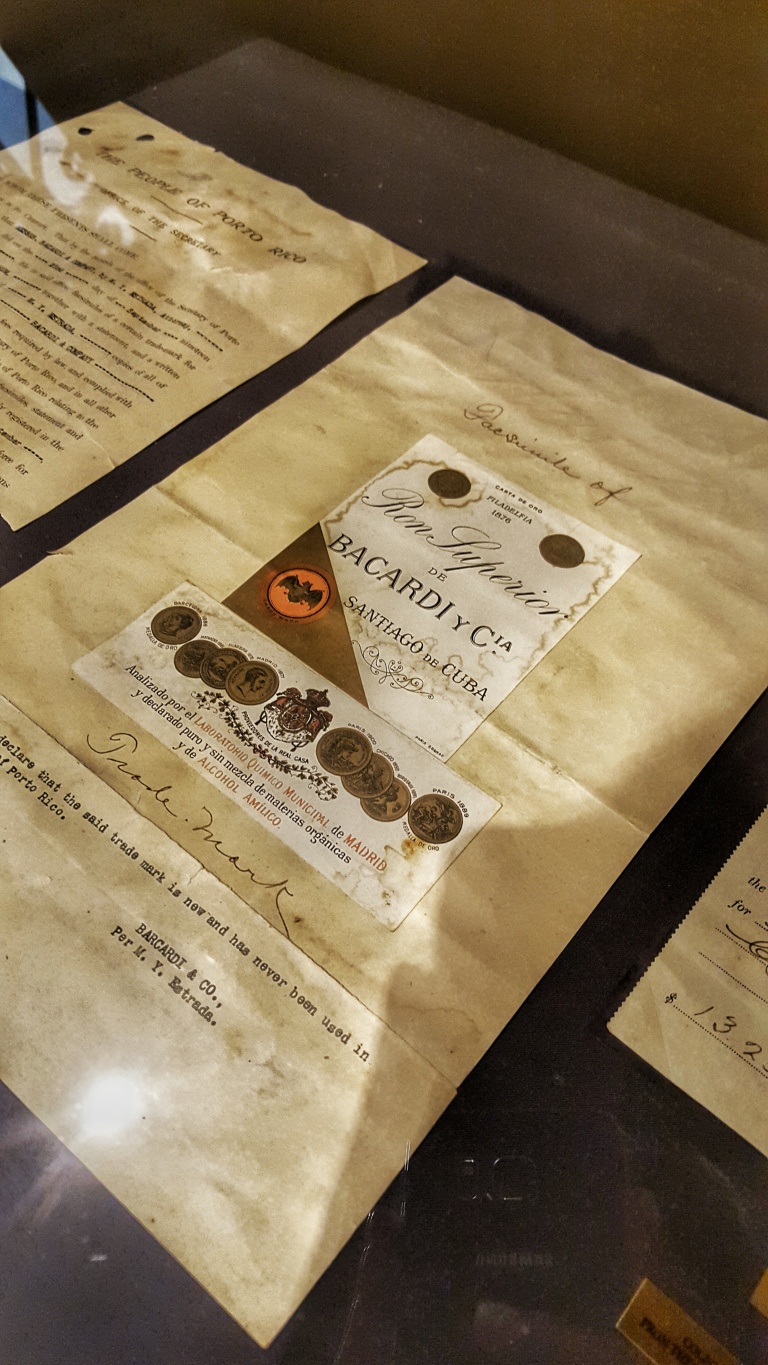 7. …and the family holds the secret to the great taste of Bacardí rum.

When Facundo Bacardí Massó first came to Cuba in 1830, the locals already drank a primitive form of rum, “Aguardiente”, or “fire water” as it translates. It was cheap and unrefined, and rarely sold in upmarket taverns. So Facundo Bacardí Massó attempted to “tame” rum, by isolating a proprietary strain of yeast – one that is still used in Bacardí production today. This yeast gives Bacardí rum its flavour profile.

After experimenting with several techniques, Facundo Bacardí Massó found that filtering the rum through charcoal, removed the impurities. In addition he aged the rum in white oak barrels, which had the effect of mellowing the drink. The final product was the first clear, or “white” rum in the world.

I found out on the tour that standard charcoal filters are used for all rums, but that coconut shell charcoal is used for gold rum. Classy.

8. Did you know that Bacardí is aged in ex-Jack Daniels barrels?

Bacardí was the first rum maker to pioneer these particular methods.

Founder Facundo Bacardí Massó spent a great deal of time testing the interaction of wood with spirits. At that time, most spirits were shipped in whatever kind of barrel was available (used cognac casks, wine barrels, and barrels made from a wide range of woods). It was through trial and error that he discovered that aging rum in American white oak barrels produced the best results, ultimately setting the standard for aged rum in the world.

The tour guide then told us that the barrels Bacardí buys in are actually ex-Jack Daniel’s barrels, used for maturing its bourbon. Unlike other spirit producers, Jack Daniel’s uses its barrels just once. So not only is Bacardí making great rum, it’s also being environmentally friendly, as it uses the barrels over and over.

9. Even more green points, Bacardí’s distillery is powered by a huge windfarm.

Not only is Bacardí’s Cataño distillery the world’s biggest, it’s also the greenest. The company inaugurated a 500kW wind farm in April 2010, to power its rum production with renewable energy. It was the first industrial scale wind farm in Puerto Rico, and the biggest on the island at the time of opening.

Look how pretty the 100ft turbines are (I have this thing for windfarms):

So there you have it – everything you ever needed to know about Bacardí and rum production in Puerto Rico.

Bet you fancy a Mojito now, I know I do.